Created in 2017, the title of an ‘ATFA Legend’ is awarded to members of the Australian Table Football Community who have gone above and beyond expectations in contributing to the growth and development of Subbuteo in Australia.

These members are recognised for their hard work and support by fellow members who appreciate the enjoyment and opportunities which have been created through their efforts. 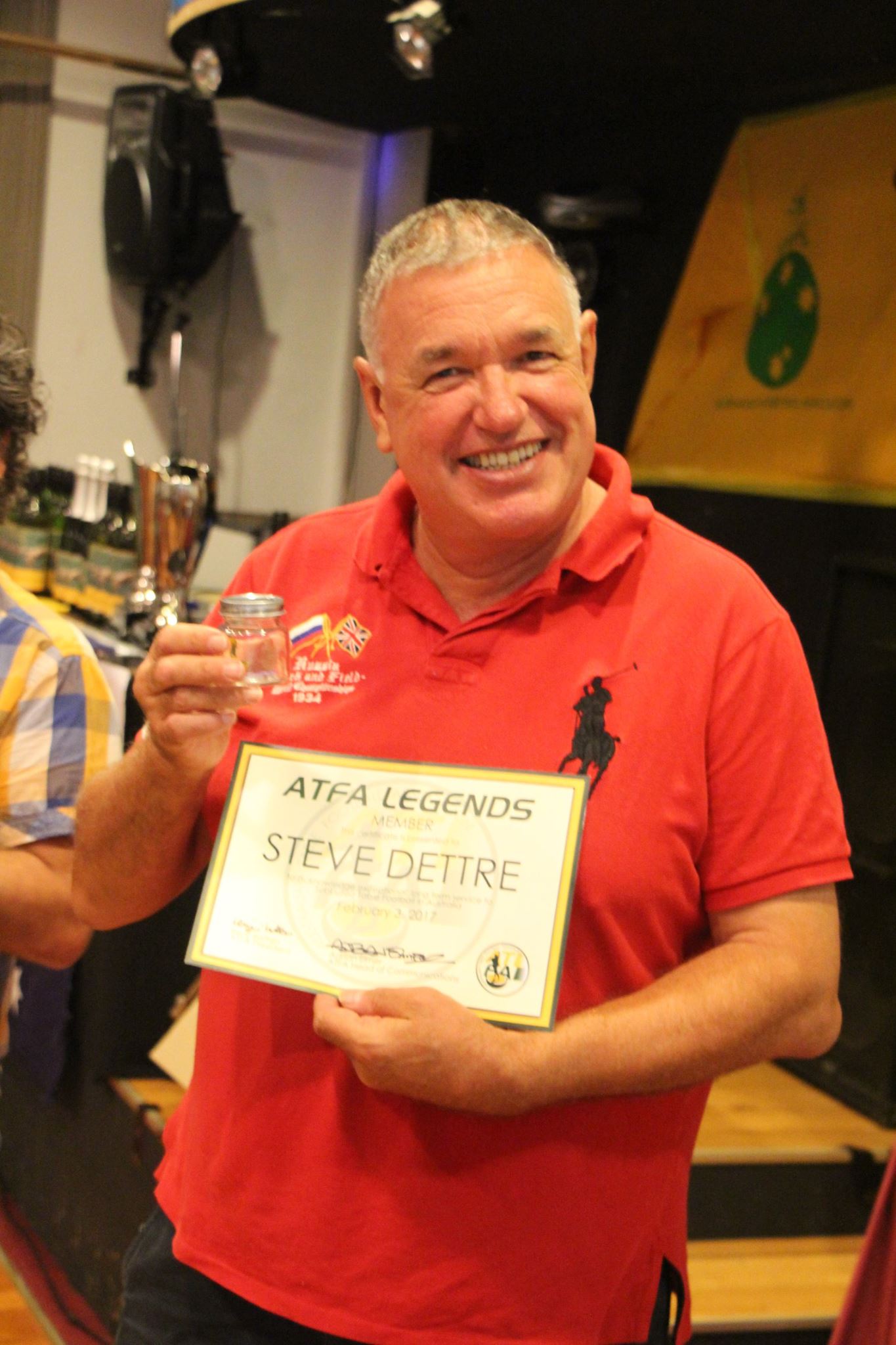 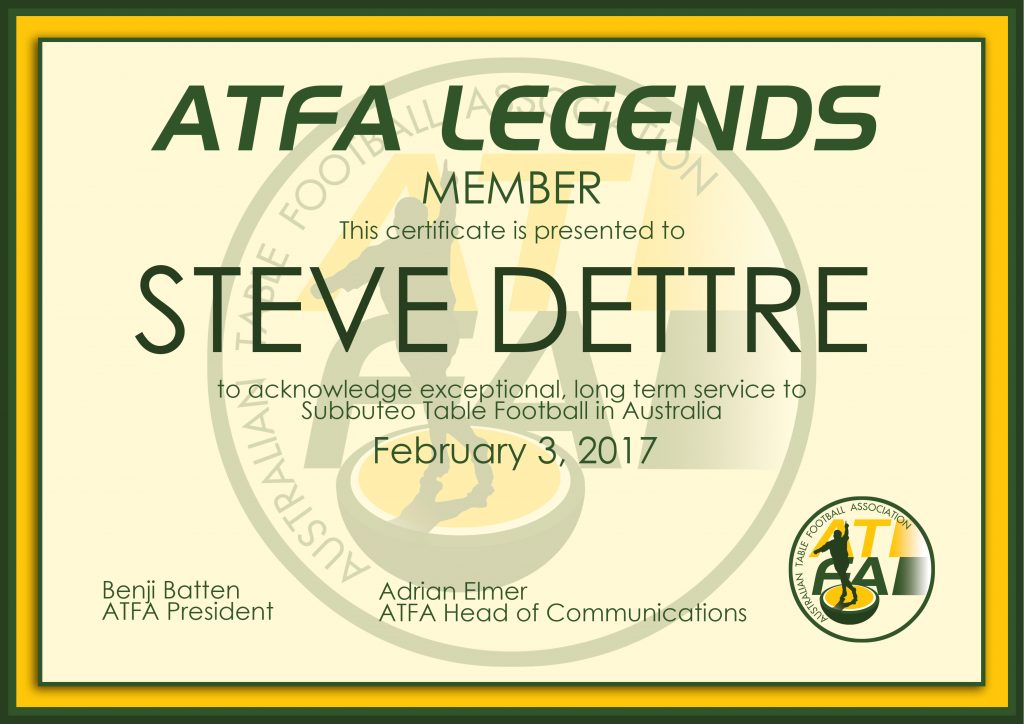 When it comes to table football in Australia, Steve undoubtedly towers above all others in terms of being the driving force behind people being able to get together and play. Steve (along with some friends you’ll meet below) started the first competitive leagues in the country as a teenager in the mid-70s, was a big part of the mid-80s Australian Subbuteo revival which led to clubs being established around the country, was instrumental in the foundation of the game’s world governing body – Federation of International Sports Table Football (FISTF) – in 1992, and has led the second Australian revival during the 2010s. He has served on the ATFA Committee and, since 2017, has served as the President of FISTF. Through all these different phases, Steve has led his beloved Northern Falcons club in Sydney’s Northern Suburbs, organising countless tournaments and introducing and facilitating generations of players into the game. An avid story teller and historian of the game, Steve’s passion continues unabated. 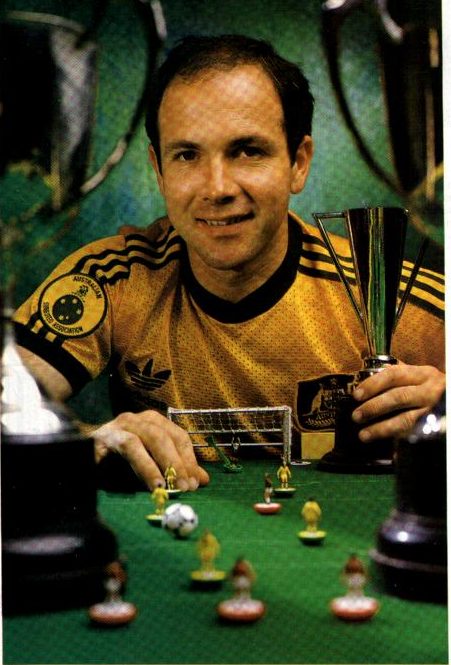 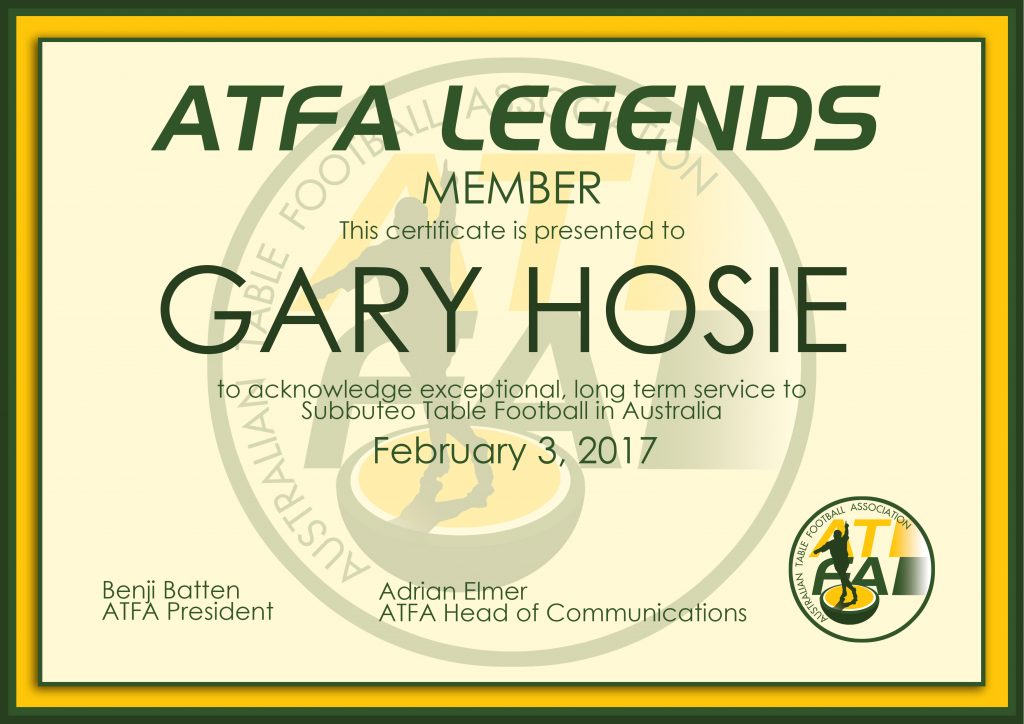 Widely regarded as the greatest Australian born player of all time, Gary was also instrumental in establishing the game’s fledgling competitions in the mid-70s at North Sydney Boys’ High School. The game became part of the co-curricular of the school, and expanded out to create a league with four divisions, drawing in players from outside the school. In their own inimitable fashion, the players were dubbed as managers of allocated teams, which were based on the English clubs of the time. Thus a poorly performing ‘West Ham’ team could have its ‘manager’ replaced – causing a nightmare for historical re-creation of the competitions. He also steered its mid-80s to mid-90s Australian heyday. Gary was the first Australian to play at a World Cup, in 1990. He was heavily involved in the establishment of world governing body – Federation of International Sports Table Football (FISTF) – in 1992. In his active playing days, Gary was rarely beaten and the tactics and techniques he pioneered in Australia are still widely used in our community today. 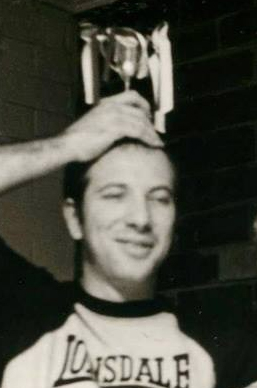 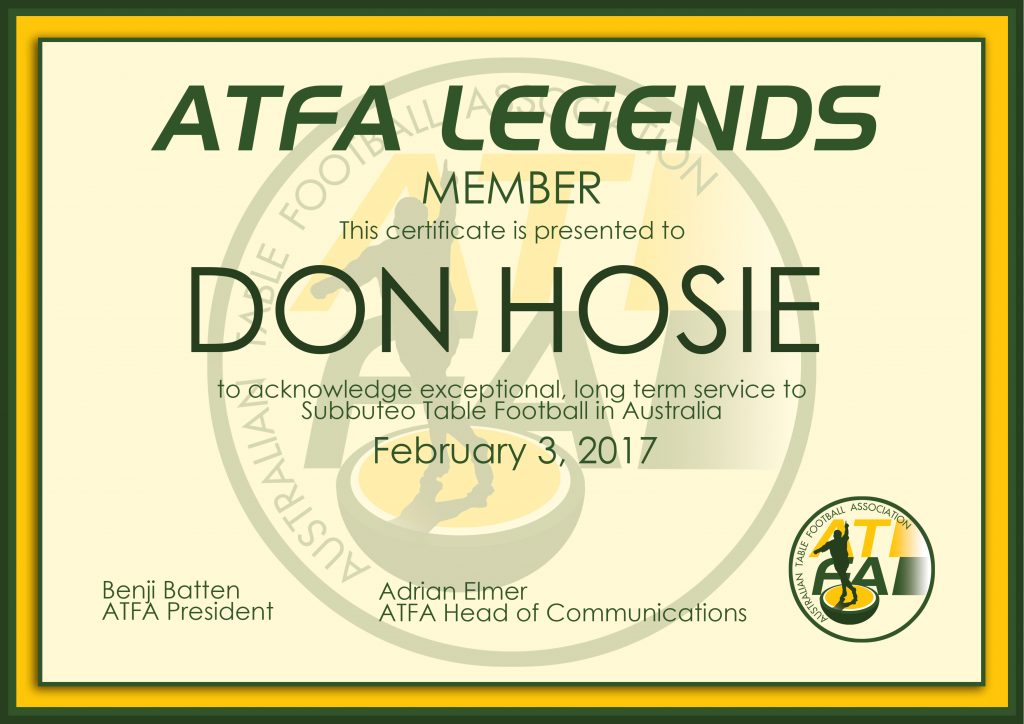 Don Hosie was a driving force behind organised Subbuteo in Sydney in the 1970s. Together with his brother Gary, they forged a tremendous Subbuteo culture at the North Sydney Boys High School. Don was also the standout player of the time, only threatened seriously by Gary, as he swept all before him, and teaming with Gary in a near unbeatable doubles partnership. His tactical nous, skill and determined attacking put him ahead of the pack in the days of cotton pitches, HW figures and no polish. Possibly his greatest skill was in identifying those around him who could bring talents to the league and then the nascent NSW Federation. In the early 80s he fell out of the game, focusing on his football and career, but made sporadic comebacks for big tournaments. Don died in 2000 in an automobile accident. 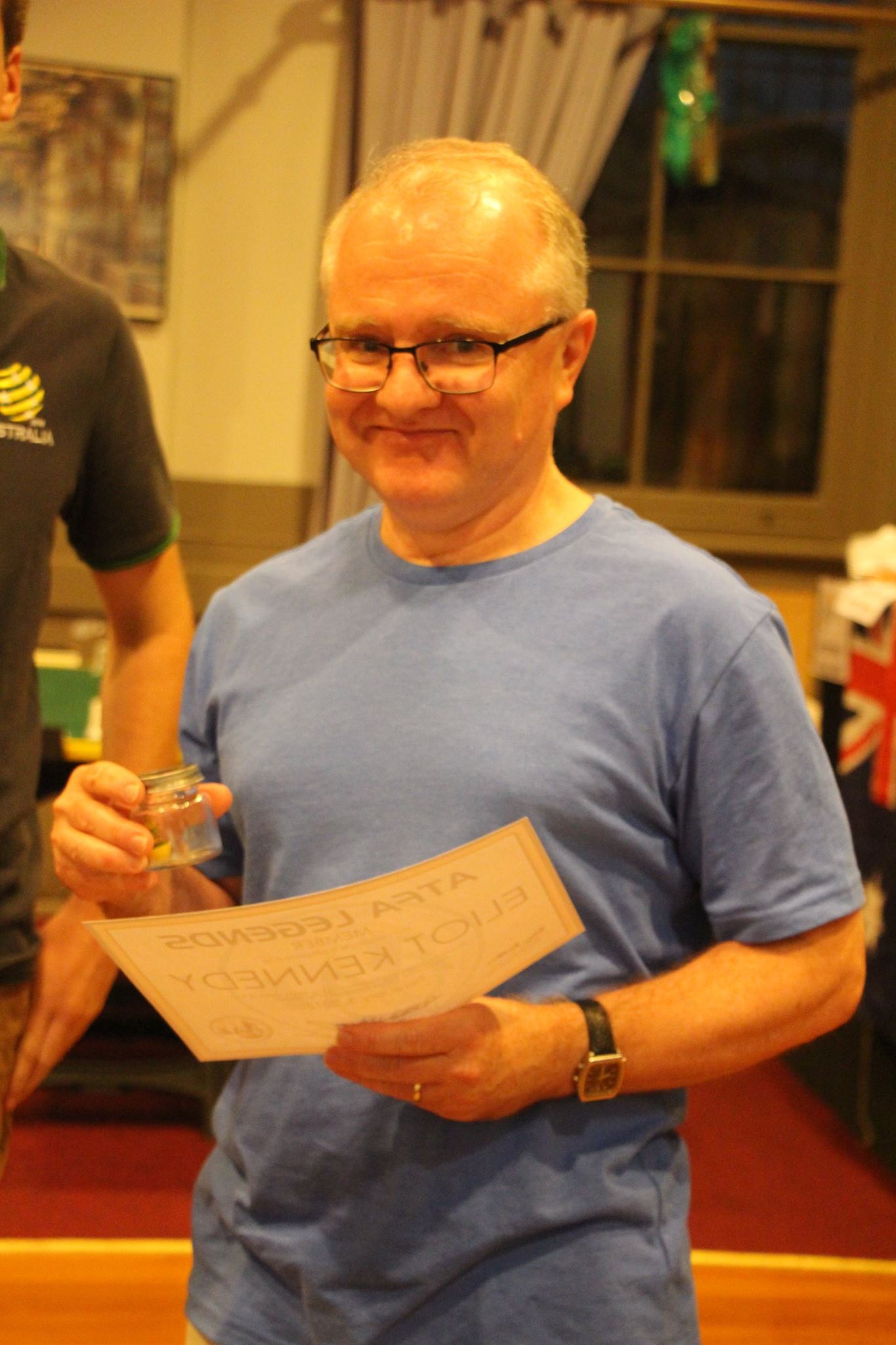 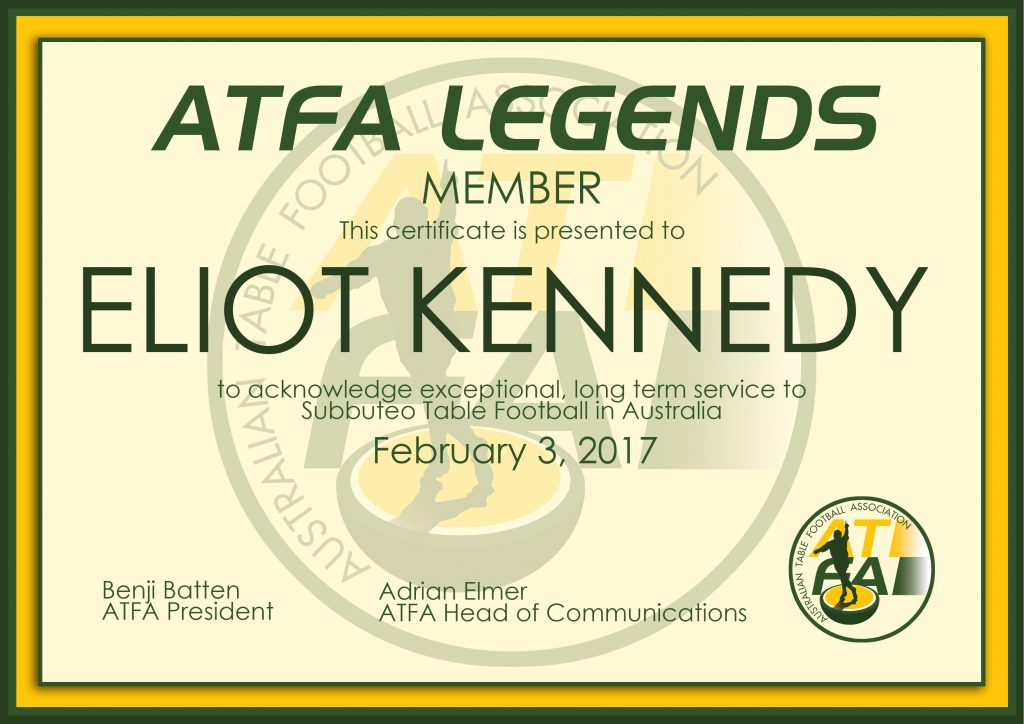 The final member of the ‘gang of four’, Eliot has been ever present from the country’s first leagues, where he developed a reputation as a passionate firebrand, until the present day, where his surface calmness belies a still intense competitiveness. He has represented Australia at the 1994 World Cup. As a player, Eliot perhaps had to bide his time under the shadow of his good friend Gary, but he has now become one of only a handful of Australians who can go into any tournament in the country, no matter how big, with a hope of coming away with the title. Eliot is a fierce competitor but one who will give any learner player any time and advice they could want, encouraging each generation of player as they have come along. He has served on the ATFA Committee since its foundation in 2014 and is still heavily committed to his beloved Northern Falcons. 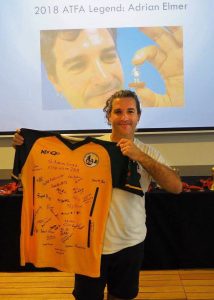 Not knowing the original Australian table football community, Adrian began organising his own tournaments to rope friends in to play in the early 2000s. In 2013, he discovered the fledgling groups in Sydney and Melbourne who had picked up the game again and then became an integral part of the establishment of ATFA and the revival of the game in Australia, serving on the ATFA committee since its inception. With a philosophy of ‘build it and they will game’ he established a club, organised regular tournaments and then began to expand on these – organising the ATFA era’s first club league, the first Junior tournaments, the first retro tournaments and running school tournaments – in order to introduce and make the game accessible to as many players as possible. Adrian is also known for his graphic design work, creating distinctive logos and posters for clubs around the country (including the ATFA logo), and the ATFA trading card sets. He is still working on the quality of his actual playing.