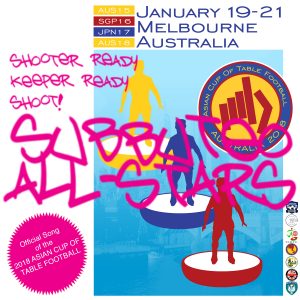 Add Subbuteo All-Stars to that list of luminaries who have contributed official songs for teams and tournaments over the decades. The Asian Cup of Table Football is heading to Melbourne, Australia in 2018 and Subbuteo All-Stars have got the music to keep you pumped. With a starring cameo from Australian Subbuteo legend (and current FISTF President), Steve Dettre, ‘Shooter Ready – Keeper Ready – Shoot!’ will drill its way into your head and lodge itself there for you to hum and whistle to your heart’s desire.

Though they have created a catchy, modern pop classic, Subbuteo All-Stars understand that not all table footballers were born this millennium, so to cater to some of the range of players and fans of all ages, they’ve also reworked the song into an 80s synth-pop anthem, an early 90s acid house banger and a brooding 2010s trap track. Rumours of black metal and Eurovision entrant versions remain just that at this stage, but who knows what the future may hold?

Download your copy of the single with all the remixes for free (or make a donation), stream them, pass them on to friends but, most of all, make sure you sing along as you head to Melbourne to pit yourself against Asia’s best over the Subbuteo pitches.

There are no fancy uniforms, no Sports Commission grants, nor a single dollar in sponsorship.

To be brutally honest, there’s not even much fanfare for this team of unheard-of Australians, in a little known sport, who this weekend celebrated their first overseas victory since 1994.

The event is the Asia Cup. The sport is table football, or Subbuteo.

Never heard of it? Never mind. You have now.
Australia plays Japan in Subbuteo Asian Cup
Photo: Australia cobbled together a team in time for the Asian Cup, even flying in one team member from Sweden. (Australian Table Football (Subbuteo) Association)

The event is being played in Tokyo and the Australians spent last night celebrating a 3-1 win over Japan.

Australian team spokesman Steve Dettre told The Ticket “people may laugh but it’s like any sport, you play at a pretty high level and it’s quite tense”.

“Some of the best players in Asia are here, actually some of them are ranked in the top 50 in the world,” he said.

“It’s quite a challenge playing at this level … like the game I just played, one mistake and the other guy scored, so it’s pretty hectic.

“We’ve got about 200 to 300 players in Australia now. It doesn’t sound like a lot but we started from ground zero and we let everybody know the Asia Cup was coming up … so we put together a team.

“We got a guy from Perth, two are from Sydney and an Aussie guy flew in from Sweden.”

There are six nations, including Australia, to contest the prestigious ‘Open’ event on Sunday. Saturday featured a veteran’s comp and the Nation’s Cup — featuring Japan, Singapore and Australia.

Our highest ranked international Table Football player is Melbourne TFC’s Peter Thomas, ranked 40th in the world
The Melbourne Table Football Club is ranked 44th in the world
There are table football clubs in every Australian capital city
Club membership is for men and women, boys and girls of all ages
Matches consist of two 15-minute halves
The Asia Cup Open will be covered by NHK Japanese television
Australia has never won the Asia Cup

Despite its historic victory over Japan, the Australians weren’t good enough for Singapore who walked away with the Nation’s Cup.
Australian and Japanese players at Subbuteo Asian Cup
Photo: Raffaele Lombardi (R) is one of Australia’s team-members in Tokyo. (Australian Table Football (Subbuteo) Association)

The International Federation of Subbuteo Table Football (FISTF) is not as advanced, or well funded, as their cousins from FIFA so a win at the Asia Cup doesn’t provide a pathway to a world event.

“The international scene is not that developed, but obviously that’s a future plan,” Dettre said.

“All we’ll get for winning something here will be bragging rights.”

The Australian Table Football Association is proud to announce its squad for the 2016 Asian Cup of Table Football, to be held this weekend in Singapore. Six Australians will make the journey with four players from the Northern Falcons club in Sydney and one each from Subbuteo Parramatta and Melbourne TFC. The Falcons will also compete in the team event where they will defend their title as the top club in Asia, whilst the Australian national team will seek to win their maiden Asian Cup after a heartbreaking defeat to Singapore in the inaugural edition held in Melbourne in 2015.

The brainchild of Melbourne player Benji Batten, the Asian Cup concept was created in 2014 with the purpose of bringing together Subbuteo players from all of the countries in Asia to compete for the crown of the best player/club/country in Asia. The first edition was held in Melbourne in 2015 and now Subbuteo Table Football Association of Singapore (TFAS) have taken the reigns for 2016 and added their own unique touches.

ATFA President Steve Dettre is a legend of the game and has co-ordinated the traveling contingent magnificently. After a quarter-final placing in the 2015 edition, Steve could be a dark horse to stir up the pot in Singapore. Dettre is excited about the Asian Cup, and the growth of the game throughout Asia.

“We have huge growth in Japan, and have just concluded a deal with J-League clubs” said Dettre. “Iran, Indonesia, China … everybody is getting on board now”

When asked about the Australians’ chances, Steve Dettre explained – “Peter Thomas is the current Asian Cup (individual) champion and will be looking to defend his title in Singapore. Raffaele Lombardi will be playing in his 3rd FISTF event in Singapore, and after impressive showings in the 2015 FISTF World Cup and the Australian Open and Grand Prix events, the lone representative of Subbuteo Parramatta will be hoping for some good results. Eliot Kennedy is no stranger to the international scene having represented Australia at the 1994 World Cup and the 2015 Asian Cup. He is a stern competitor and unknown to many Asian players, Eliot could well be the surprise packet of the tournament. Johnny Ball played with the Falcons at the 2015 Asian Cup where he reached the barrage round. Ball also played at the 2015 International Open of Singapore. Simon Cole rounds out the Australian contingent, the 2016 Asian Cup is Simons first tournament overseas and we hope he does well.”

Table Football, or “Subbuteo” as it is widely known, is a game simulating association football. For many years it was marketed as “the replica of Association Football” or “Table Soccer”.