The Brisbane Subbuteo Club’s November 2016 tournament had few missing faces, but we welcomed back Rob who had been out of action for a while, and was good to have our elder statesman back.

So only six players competed on a warm but pleasant day in Queensland.  A league format was played, with the top 4 playing semis and a final.

The first round draw registered a groan from Gus, who had lost his previous two games to Andrew B 5-1. However, Gus managed his defence much better, and last month’s champion had to settle for a 1-1 draw after applying a fair amount of pressure on Gus’s goal. Rob managed a goal on his comeback, which was pretty good even though losing to Australia’s #2 Rik.  In the other game, young James (9) took on Australia’s #1 Giuseppe, and managed to keep the game to a 1-0 loss (no mean feat).

As the players began to relax and find their flick, the goals began to flow.  Andrew, Rik and Giuseppe all scoring 3, Gus momentarily fighting back to 1-1 with Rik before becoming overpowered. The 3rd round saw a rare 0-0 as our senior player Rob took on James, only 60 plus something years separated the players but the score didn’t.  I’m sure James learnt a lot.  Rik took revenge on Andrew after his final defeat last time out, with a 5-3 victory (score was 1-1 at half time). Giuseppe was finding his form as Gus’s defence was ripped apart in a 4-2 thriller.

The penultimate round saw the fewest goals, the Bennet father and son derby saw Andrew win 2-0, but Rob really made him work for it. There was also another father and son game with James taking on Dad Gus, and Gus got his first win of the day at James’s expense, but hugs were shared after the final whistle. The big guns Aussie #1 v #2 Giuseppe v Rik , Rik edged it 1-0.

In the last round, the big game saw Giuseppe beat Andrew B  4 -2, so last month’s winner Andrew who was unstoppable finished 4th in the group.

So 1st played 3rd and 2nd played 4th in the semis.

The first semi between Rik and Gus was a fast and furious game. Rik took a 3-0 lead and looked to be set in the final when Gus finally started to find some form, and before you knew it, the score was 3-2. This seemed to stir Rik, who then stepped up a gear and finished convincingly winning 5-2.

In the other semi-final, Giuseppe took a 2-0  lead and also looked to be cruising, but Andrew got one back and pushed hard for the equaliser which looked likely but was beaten by the stubborn defence and ultimately the clock.

Unfortunately we couldn’t video the final between Rik and Giuseppe as it would have been a classic.

Rik was really on his game and after taking a well-deserved 2-0 lead looked to have the trophy in the bag. However, Giuseppe was like a terrier, and kept nagging away. It proved effective, as within the space of three minutes, Rik made two very basic defensive blunders which Giuseppe pounced on like a starving adder. All of a sudden it was 2-2 and the time was ticking. In the end though, Rik composed himself and played a really good counter attack, finishing with probably his best goal of the game. The remaining 90 seconds saw Giuseppe charge but Rik’s Germans formed the Berlin wall and victory was his.  Those who play this game would appreciate just how quick 15 minutes can pass, this game seemed to last only 5 in total.

Another great day of competition was had by all, another worthy (if not relieved) winner and we are all looking forward to the next tournament.  A big thanks as always for the best host Giuseppe, he really looks after everyone, and it’s a great place for all to play. Also a big mention to Rob, who not only made his playing comeback at 123 yrs old, but gave us all a 16 question rules quiz at lunch time which was awesome, so good in fact we have agreed to continue that on as it really helped everyone. 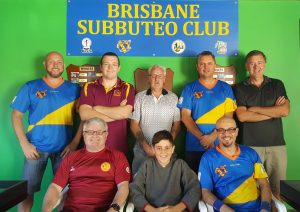 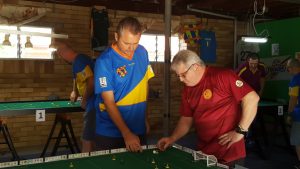 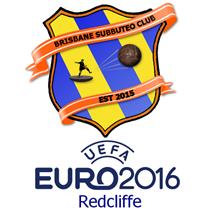 The Brisbane Subbuteo Club held its very own Euro 2016 Tournament on a cold day in Redcliffe (Ed: Was wondering what Giuseppe considers cold: 12C, which in Brisbane is, I guess, cold!!!).
Eight countries were represented by our flicking heroes.
The format was to be 2 groups of 4 with the top team of each group playing the runner up of the other group, and a Plate for the 3rd and 4th players.
Group A, aka the “The Group of Death” had Italy (Giuseppe Tardiota), Belgium (Andrew Bennett), England (Gus Gillespie) and Wales (Gareth Whalley).
Group B had Germany (Rik Bland), Iceland (Rob Bennett), Northern Ireland (Andrew Ridgen) and Sweden (Wil Gillespie – our new U12 player). 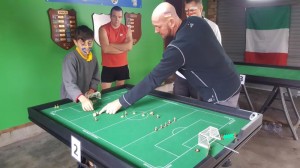 England took on Belgium in a very tight contest. England took the lead early in the first half and made it to half time in front. Belgium came out fighting and equalised. At 1-1 the game was poised nicely and both countries went looking for a winner. With less than 30 seconds on the clock Belgium broke through the English defence and chipped a nice shot over the keeper. In the other game of Group A Wales (first tournament for Gareth) were facing the mighty Italian (not in height that is) Giuseppe. Gareth did manage a goal but lost 4-1. 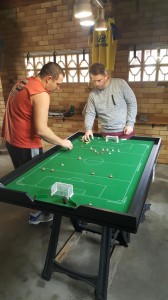 In Group B the Germans saw off Iceland 3-2, after taking a 2-0 lead within the first 2 minutes, but Iceland surprising the Germans with a couple of tasty goals. Sweden (Wil’s first tournament) lost to a determined Northern Ireland 4-0. 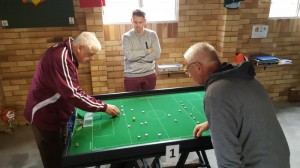 Next round of Group A games had Belgium see off Wales 6-0 and Italy beat England in the last minute 1-0. These results meant that Italy and Belgium were through. Over in group B Northern Ireland ruthlessly beat Iceland 5-1, and Germany beat Sweden by the same score (Wil registering his first ever competitive goal). So Germany would go through with N Ireland.
So the last round of games would determine 1st from second, and 3rd from 4th. Italy claimed top spot with an exciting 4-2 win over Belgium. England finally managed a win, though against green opposition, 5-1, Wales (Gareth) scoring a very good goal. Germany edged N Ireland 2-1 in a tight battle.
The semis were pretty conclusive results. Italy continuing in great form dispatched Northern Ireland 3-1 whilst Belgium humbled the Germans 4-1. The German manager Rik Von Bland was suffering from ‘flu and reckoned it went through the team as well!! 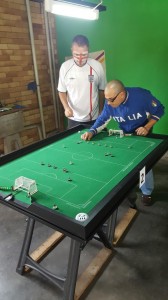 The Plate was abandoned because Wales had to go home early. Mrs Wales was heading off to work…
The Final produced some great goals and a fair amount of controversy. With the score at 1-1 after a Belgium equaliser, Italy went into the lead after a contentious decision. The game ended 3-1 to Italy and though Belgium felt hard done by, they were gracious in defeat. Another great day of flicking fun, and only two years to wait for the World Cup Tournament. 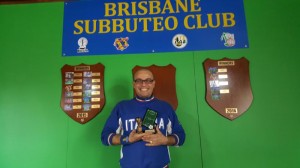 Oh, and the 3rd 4th play off went to Northern Ireland, 5-4, so N Ireland finished 3rd, and boy did we get reminded of that a lot. Special thanks as always to our great host Giuseppe, and well done to our new bloods Gareth and Wil. It’s a big ask to play your first tournament and represent a country! 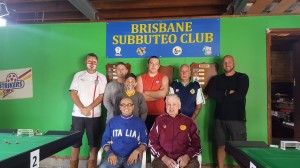 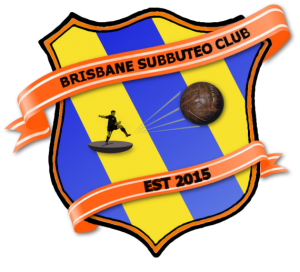 The Brisbane Subbuteo Club leads the way in Australian Subbuteo, being the only club with their own dedicated website. They have had a temporary website in place since their inception in January, but now club member ‘Gus’ Gillespe has built a full featured website. On the site you can find a history of the club, details on upcoming tournaments and friendlies, all their old results, profiles on club members and details on how to get figure painter, Giuseppe Tardiota and board builder, Rik Bland, to do some Subbuteo related work for you.

Check it all out at www.brisbanesubbuteo.org