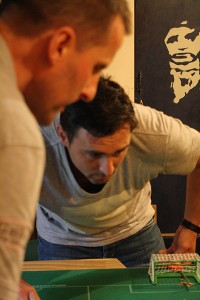 Early games saw Adrian beat Raffaele in a competitive match for the first time, while Robert, over from Sweden for the Asian Cup(s), got off to a smooth start with a 4-0 victory over Daniele. Daniele held out for a 0-0 draw against Adrian while Fabrizio, playing with his own Italian U19 champion winning figures which he recently had sent across from Italy, got over Raffaele (who was trialling his own new figures) 2-1. In the day’s biggest surprise, Adrian managed a 1-0 victory over Fabrizio. Unfortunately, the battle of the Lombardi brothers didn’t offer it’s usual verbal fireworks as the two battled it out in tense near-silence, Raffaele finishing with a 1 goal advantage. Heading into the final game between Robert and Fabrizio, both players had a mathematical chance to win the tournament, while Adrian also looked on with interest as a victory to Robert would secure him 2nd place. By the middle of the second half, Robert had secured a two goal lead. However, Fabrizio was making it uncomfortable. END_OF_DOCUMENT_TOKEN_TO_BE_REPLACED