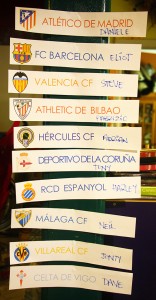 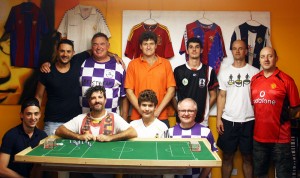 Following the December break, the Sydney Premier League picked back up again with an early January tournament. Big Steve Dettre was flying in from Las Vegas just for the tournament, but his flight was delayed in LA, leaving the door ajar for a few players to possibly go ahead of him on the SPL table. Dave Sultana was on hand to play in his first ever tournament, having first picked the game up a couple of months ago, while Dave Rudd made his SPL début following his return to the game in the Spring League and Tony Credentino added to the Italian flavour of the Sydney Subbuteo world, having played sporadically over the last few years but returning in earnest this month. And, in a Sydney first, a Junior competition was also played. Though small, as with the game in general over the last few years, these first steps will hopefully lead to strengthening the junior game in the long term. 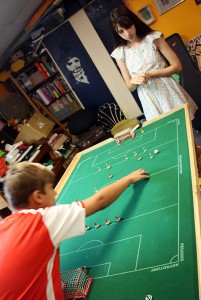 Lucas pushes forward against Æowyn in the Juniors Division.

That Junior competition saw Lucas Butterfield and the Elmer sisters, Imojjen and Æowyn, play each other in a round robin. The first game saw Imojjen take on Lucas. While neither dominated overall, it was Imojjen who created the better chances. Lucas made a couple of excellent saves but Imojjen squeezed one through with a nice chip in the second half. The next game saw the sisters face each other, where the quality dropped as both Æowyn and Imojjen played nervously, each trying not to concede as the sibling rivalry kicked in. A goalless draw was the result. In the final match, Æowyn lifted her game while Lucas had grown more accustomed to his new figures and also played well. A very tight game saw few chances. The goalless outcome meant Imojjen took the title, though all three players picked up points, enjoying playing even games rather than being hammered by the more experienced players, and then retired to play a few other board games while the Opens players headed into their knockout stages. 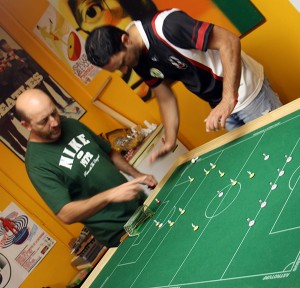 The two players at the top of the Sydney Premier League table, Eliot Kennedy and Daniele Lombardi were the two seeded players. Daniele made short work of Dave Rudd with Dave even being so generous as to score an own goal for Daniele’s benefit. Tony had a solid start, creating some chances for himself, but Mat Barrie’s experience was the difference in the end as he eased to a 3-0 win. Mat followed this up with a hard fought victory against Dave Rudd with a solitary goal being all that divided them. Eliot blew out both his own cobwebs and Adrian’s, storming to a 3-0 lead by the break. Adrian was much tighter in defense in the second half, neither player troubling the scoreboard in that period. The two Italians (who had earlier discovered that they coincidently had family connections dating back 35 years) faced each other. For a player who was on the wrong end of a 3-0 scoreline, Tony did a surprising amount of attacking, frequently putting pressure on Daniele’s goal. However, he was unable to breach the defence and Daniele eventually eased to the victory. 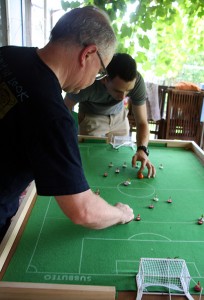 Meanwhile, Dave Sultana faced a baptism of fire, his first ever competitive game against one of Australia’s best in Eliot. He was not disgraced, though, showing good touch for such a new player. Eliot’s class was evident, though, scoring four. Both players enjoyed the cooler outdoor pitch as the main clubhouse room began to swelter in the heat and humidity. Dave then backed up with a strong showing against Adrian. Adrian could only break Dave’s stout defense once, finding the goal with a long distance shot through a small gap in the first half Dave hit the crossbar himself in the second half, unlucky not to draw level. Tony managed his first victory with a hard fought 1-0 win over Dave Rudd, both players enjoying the tight tussle. In the final group game, Mat and Daniele were fighting for first place in their group. Mat took the lead in the first half and then defended well. With four minutes left it looked like he might be able to stitch up 1st place. Daniele had other ideas and, in a late blitz, put two goals past Mat’s ‘keeper to take the group.

A barrage stage saw the 2nd and 3rd placed players face each other. Again, Dave Sultana put on a good show but Mat was calm in taking the game 2-0. Adrian won his game against Tony via the same scoreline, Tony unfortunately conceding with a stranded ‘keeper to make it comfortable for Adrian. To the Semi-Finals, then, where Eliot’s earlier free-scoring ways were dried up by Mat. In the end, Eliot could only squeeze one goal, seeing off Mat with a sigh of relief. Daniele and Adrian fought out an equally tense game. A first half goal gave Daniele an early cushion. However, Adrian pushed hard for an equaliser. With time running down, Adrian pushed hard and had Daniele under pressure but a swift counterattack saw Daniele finally seal the win with the last flick of the match. Meanwhile, in the consolation game, the two Dave’s went head-to-head. Neither could find the goal in normal time, or extra time, so the game went to shots. After 5 shots each, the scores were still level at 3-3 and it went to the 3rd shot of sudden death for Little Dave (given the title due to age differential rather than size differential as with the Steves) to finally take the advantage and the ‘Dave’ bragging rights.

In the 3rd and 4th Play-Off, Adrian had home ground and home strip advantage over Mat and made full use of it. For the second game in a row, Adrian was able to score via a stranded travelling ‘keeper mistake from his opponent. He gave himself some breathing space with a second goal and was able to hold that scoreline until full time. Meanwhile, the Grand Final was a true thriller. A tight tussle stalled midway through the first half as a refereeing matter was discussed at length and then cleared up to everyone’s satisfaction. Things looked like they would head to a half-time stalemate until, with the last flick of the half and literally one second left on the clock, Daniele scored to excitedly take the lead, Eliot devastated that he hadn’t held out for that one more moment. In the second half, Eliot piled on the pressure looking for an equaliser, but Daniele looked dangerous every time he surged forward. With a few minutes left, the game was placed on a knife-edge as Eliot finally broke through. Then, as Daniele had done in the first half, Eliot surged forward in the final seconds. With the last flick of the game he shot…and the ball crashed into the crossbar where it meets the upright, ricocheting out of ply to leave the result at 1-1. After a brief interlude (a chance for both players to get some much needed fresh air and for a group photo opportunity), the two went at each other again for extra time. With just a couple of minutes to go Eliot found the back of the net with a deadly chip – only to find one of his figures was off-side. And so the score remained 1-1 at the end of the extra period. 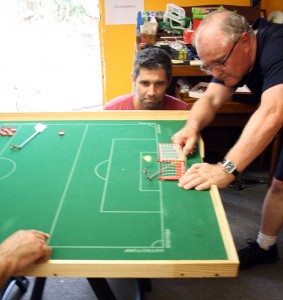 Daniele chips Eliot’s ‘keeper with his first in the shootout.

And so to Shots. Eliot shot first and missed, but Daniele was in fine form and, after 3 shots each, had a 3-1 advantage. Eliot managed to bury his 4th, but Daniele needed only to score to take the title. He adjusted the order of figures he used, bringing his beloved Maradona in to take the winning shot. Except he didn’t. Maradona missed, Eliot scored his 5th to tie the scores and then kept Daniele’s final shot out to send the shootout to sudden death. Both players missed their first, then Eliot took the decisive lead with his 2nd. Daniele was unable to respond in kind and so Eliot grasped victory from the jaws of defeat in one of the more thrilling encounters of recent times.

And so Eliot extends his lead at the top of the Sydney Premier League Table, though Daniele is keeping him within striking distance. A great afternoon’s Subbuteo. Great to have some new players along, great to see the sportsmanship we’ve all come to expect, great to see the juniors finally up and running and great to enjoy some quality play across the afternoon. 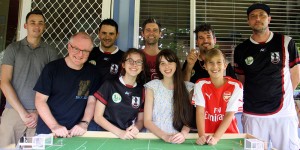