Fabrizio Coco of Subbuteo Parramatta claimed the June 23 WASPA at the Northern Falcons club night, but was pushed all the way in the final phase.
A good turnout of 10 players on a cold, winter’s Tuesday night contested the event at the Good Games Chatswood venue, using four Extremeworks pitches.
In Group 1, Neil Brenner did well and pushed for a semi final place, before succumbing to the experience of Johnny Ball. 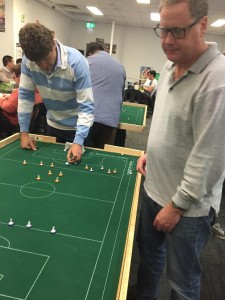 It was great to see Neil’s son Matt in action, and he will undoubtedly have benefitted from the evening’s action. As always, the more experienced players passed on tips and advice during matches. 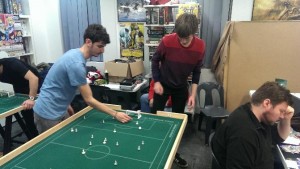 In Group 2, Dom “Mad Dog” Grenot continued to hold the wood over Steve Dettre, with a pulsating 2-2 draw. Louis continued his fast paced game, which unsettled Raffaele, though the Subbuteo Parramatta man swept the group. 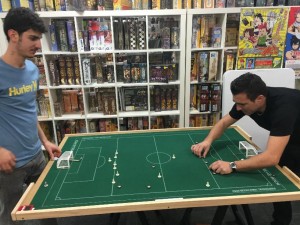 In the semi-finals, Raffaele just managed to edge out Johnny Ball, while Steve took the lead against Fabrizio only to see an equaliser in the last two minutes. The match was settled on shots, in sudden death, with Fabrizio taking the shoot-out 2-1.
The final was evenly matched, with Fabrizio squeezing the only goal just before the break, with a lovely series of flicks through the heart of Raffaele’s defence, before shooting on the run.
In the second period, Raffaele did everything he could, but he was too often caught with several figures in off-side positions, forcing him to backtrack his attack.
And then when he did get a sight on goal, Fabrizio’s reflexes denied him. This was no better illustrated than with a few minutes to go, Raffaele won a corner. His flick was beautifully weighted, and a centrally placed figure caught the ball on the run, but as it flew to the goal, somehow Fabrizio swept it away for a breathtaking save! 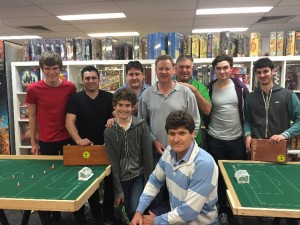 In the end, a great game to finish the night.
Many thanks as always to the players, and to Andy and Sonny for letting us use their venue.