A big upset, a new venue, an old face returned, and an unusual competition format were the features of the latest round of the Sydney Premier League played last weekend. 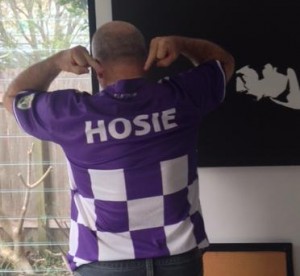 The 7th and penultimate round saw the best turnout so far of 16 players, at the home of the Hipfingerz Table Football Club in Sydney’s east.
Gary Hosie, former Australian champion from the 80s and 90s, signalled he is back as a force in the local game by beating Peter Thomas 4-2 in the final. 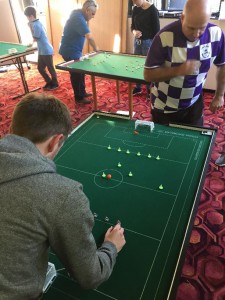 Match about to start!

Pete roared into action in the final, and scored after just 2 mins to take the lead, before Gary hit back in the 4th minute. Both players showed a willingness to craft their attacks, moving the ball around the pitch looking for an opening. Beautiful touch by both players was complemented by fantastic block flicking. 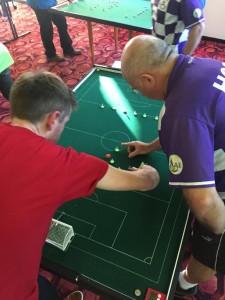 Peter and Gary in action in the final

In the 9th minute Gary again pulled Peter’s defence left and right before taking the lead, only for Pete to return the favour, scoring with a delightful chip to and make it 2-2 at the break. 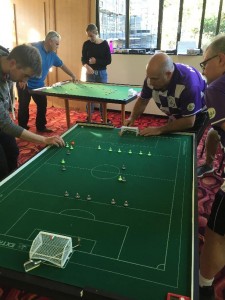 In the second half the tempo increased and after 7 mins of the half, Gary scored, then added a fourth to secure the win.
The unusual “knockout pool system” (borrowed from Gary’s involvement in petanque), with plenty of repechage and ‘plate’ action, gave everyone at least four games, with most getting five — always a bonus for the effort of attending. 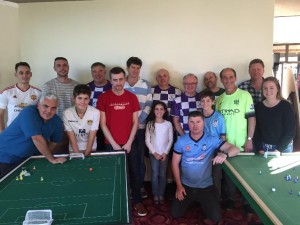 Special mention should be made of Peter’s efforts in coming up from Canberra (about the same distance as Amsterdam to Charleroi for our European friends!!) for the day. He, like all the senior players, provided advice and guidance when playing younger or newer players: best way to grow our game. 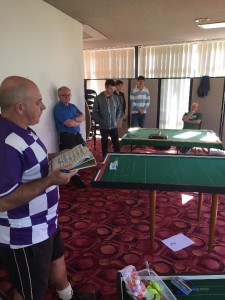 Gary explains the rules of the competition…

In the early rounds, Eliot held Gary to a draw 1-1, but lost on shots, while it was great to see Grace Lockard back in action, along with fellow youth players Daniel and Jonty. Let’s hope there can be a female competition at next year’s AGP17 with Imojjen and Æowyn Elmer, Beth Eveleigh and Grace!! 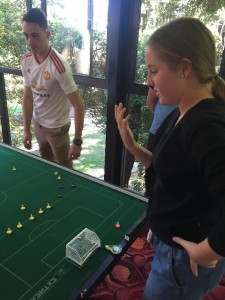 Subbuteo Parramatta’s Mat Barrie and Dave Sultana acquitted themselves well, Mat making the semi-final and Dave the quarterfinal. Mat had a real battle with Steve Dettre, leading 2-0 before Steve scored twice in the last 4 mins to send the match to extra time. When there was still no score, Mat won on shots, before nerves got the better of him in the semifinal against Gary. 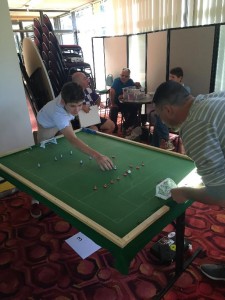 Tony Credentino continues to push people hard, but lost the B final 1-0 aet against Geoff Sirmai, who is also loving his return to the game, especially as he can play with his rapidly improving son Daniel. 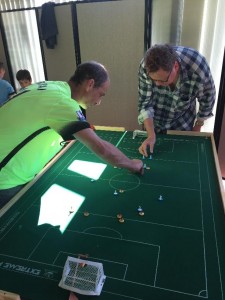 Jason Lockard is also coming along in leaps and bounds, and will be a huge addition to the Canberra scene when he moves there later this year.
A big thanks all round to everyone for coming, and to John Palamara and his daughter Catherine for coming and slotting into the plate competition ‘gaps’. John was one of the ‘refoundation’ members who played in our revival tournament back in 2010. 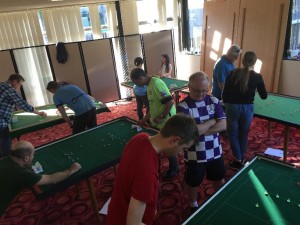 Lots of action at the Bronte Bowling Club

Also great work by Gary who is gradually winning new members and the support of the Bronte Bowling Club to use their fine facilities. And to his wife, Jane, for the great sandwiches for lunch!!!