The 15th tournament for BSC saw 8 players competing in a round robin league format. Our regular flickers were joined by 2 new members, both returning to the game after a hiatus of 10 years or so. Shane Robinson and Ian Garred acquitted themselves well considering the time spent out of the game, and with a bit of practice along with brushing up on the newer rules, they will no doubt be contesting the trophy soon. 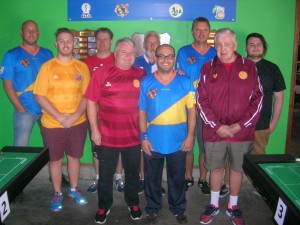 With 4 tables in play, the games were coming thick and fast, a real baptism of fire for the new guys. Reigning champ Gus Gillespie bagged 2 wins, 1 defeat and 4 draws which placed him 4th overall. 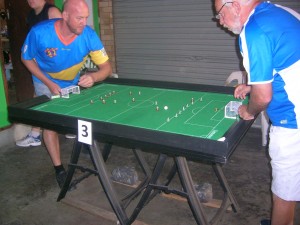 Andy Rigden has now found a way to attack without over committing players, keeping things tight at the back, playing well today earned him a 3rd place. Giuseppe had a mixed day by his standards, finishing in 5th place maybe jet lagged from his trip to Italy. Shane, Ian and Rob were in the lower places, but considering 2 were new guys and the other still recovering from an operation, did well to compete and take some valuable points from the others. 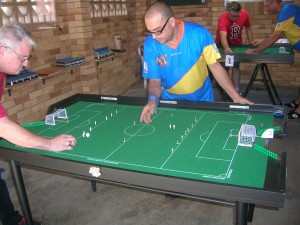 The last of the fixtures had Andrew B versus Rik, both had same points tally, both had won 5 and drawn 1 going into the final game, but Andrew’s superior goal difference meant a draw would be enough. 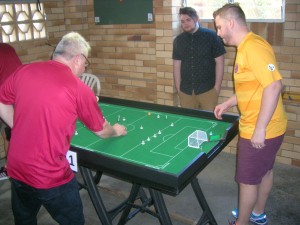 Rik took an early lead in the first half, but the game (and trophy) was still in the balance as a goal either way would decide the winner. Halfway through the second half, Rik found the bottom corner to go 2-0 up, and hold on for the victory. 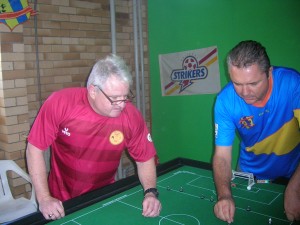 Special thanks again to Giuseppe for supplying a great venue, and hospitality.
BSC welcomes all newcomers to come along and join us, we are happy to assist in training, and supplying equipment to get you started, and we encourage former flickers to return for a bit of fun. 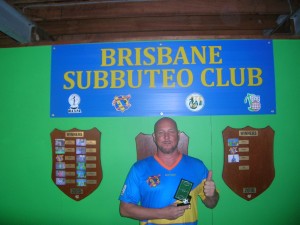 One thought on “BRISBANE SUBBUTEO CLUB TOURNAMENT May 2016”