Seven hardy souls on a balmy Autumn evening at GoodGames Chatswood for the first flick in a while.
Dave Sultana of Subbuteo Parramatta was the surprise of the night, recovering from a 5-0 loss to Eliot to claw back a 1-1 draw ith Johnny before beating Simon 1-0 to make the semis. 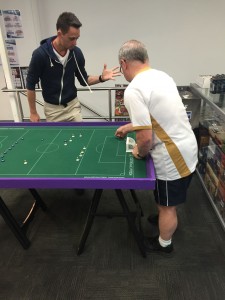 Johnny was cursing a brain snap with the spare keeper that gave Dave his goal, but admitted he wasn’t “feeling the groove” on the night. In the other group, Steve was building his game with a couple of 1-0 wins, with Harley joining him in the semis courtesy of another 1-0 win, this time over Tony Credentino. 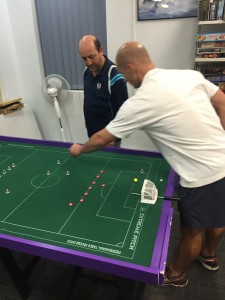 In the semis, Eliot won 4-0 against Harley, while Steve got another 1-0 win against Dave, who created a few chances. In the final, it was another epic Kennedy-Dettre battle, with some great chances, great saves, and then the decider coming in sudden death extra time, Eliot finally springing Steve’s tight defence for a nicely placed shot, and a 1-0 win. Many thanks to all for coming. With Tony’s brother Dominic now living in Artarmon, hopefully he’ll become another Falcon! Special thanks also to Andy and Sony at GoodGames Chatswood. 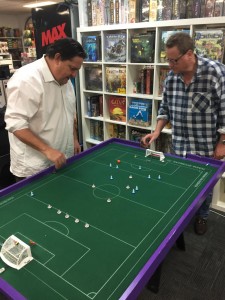 2016 May – Northern Falcons May WASPA