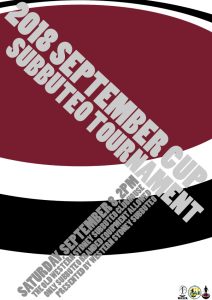 September means a couple of important things for Western Sydney Subbuteo, the beginning of the annual Spring League and the staging of Australia’s longest continually running tournament – The September Cup. The September Cup also contains an element of particular fondness for competitors as, in keeping with the tournaments history, only Subbuteo branded figures and pitches are used. So, for one tournament every year, 90s Hasbro bases rub up against 80s lightweights, 60s heavyweights and even the occasional team of cardboard or celluloid flats.

This year, 8 competitors turned up to The Old Clubhouse in Toongabbie. Split into two unseeded groups, play soon got underway on one of the coldest September days in living memory. This fact made things interesting for one pitch in particular, the outdoor verandah pitch, where players complained of cold fingers. 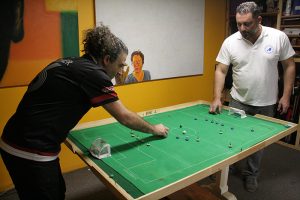 Adrian and Kostas in their opening round battle.

Early games saw Kostas Barbaris come from behind to take a 2-1 victory over Adrian Elmer, Paul Magee and Hermann Kruse batle out a frustrating 0-0 draw, Eliot Kennedy edging Costa Kamarados 1-0 and Antonio Credentino putting 2 unanswered past Oli Ollnow who was playing with old bases for the first time in his life. By the second round of games, Oli had got much more used to the bases and ran out 2-0 over Costa. Eliot got on a goalscoring roll, beating Antonio 3-1, though the general play was closer than this. Paul and Kostas scored a goal each in their match while Adrian broke Hermann’s heart with a solitary winner scored with just 4 seconds left on the clock. 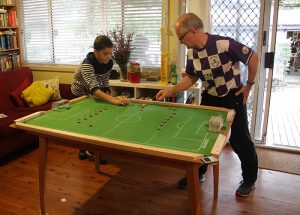 In the final group games, Group B was reasonably straight forward. Eliot continued his good goalscoring form, in spite of his jetlag (he had made an overnight flight from Korea just to be at the tournament) and was particularly pleased that some of his 1970s curling skills were able to be used for one goal in particular as he beat Oli 3-0. Antonio put 2 past Costa, meaning Eliot and he wrapped up the two top positions in the group. Group B was much more open, with all four players still able to progress and all four players still in danger of missing out. And this was reflected in the tightness of the games. Kostas kept up his unbeaten run with a 1-0 victory over Hermann which gave him top spot in the group and vanquished Hermann to the foot of the table. Meanwhile, Paul used the ‘Magee Swarm’ for large swathes of his match against Adrian, a factor which contributed to him scoring the game’s solitary goal when Adrian fell victim to the dreaded stranded travelling ‘keeper.

The Consolation Semi-Finals saw Adrian victorious 2-0 over Costa while the father-son showdown between Hermann and Oli provided some of the afternoon’s more boisterous moments. Players inside the clubhouse noted that things must be going bad for Hermann to celebrate a goal so loudly while playing against his son as one of his reactions to scoring on the outdoor pitch could be heard from right around the entire property! In the end, however, this was not enough, Oli running out a 3-2 victor. In the 7th/8th play-off, Hermann took out his frustrations 2-0 over Costa, who finished the tournament with the honour of not managing to get his early 80s lightweights to trouble the scorer across the day. in the 5th/6th playoff, Adrian repeated his earlier feat against Hermann, this time against the son, Oli, as he scored a winner with 13 seconds to go after a very even match. 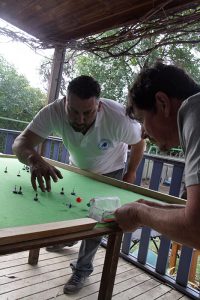 Kostas come close against Paul in the cold in the 3rd/4th playoff.

The main Semi-Finals saw Antonio finally put Kostas’ unbeaten run to an end with a convincing 3-0 victory. The other match saw the day’s two past masters, legends of the round based figures game from the 1970s and 80s – Paul and Eliot – face each other in the showdown. And the game proved to be as exciting as it had promised. Eliot came out on top in the end (no doubt, the cider he had begun consuming was helping him overcome his jetlag) but it took all 3 of his goals to beat Paul who scored 2 of his own. The 3rd/4th play-off between Paul and Kostas found the pair unable to break each other’s defenses and so the day’s first shootout ensued. After the tightness of the game, the shootout was a one sided affair, with Paul running out a 3-0 winner after only 3 shots each, to snag 3rd place.

Which left just the Grand Final to be played between Antonio and Eliot. As with the 3rd/4th playoff (and, to show just how even things actually were between all the players across the afternoon), the 20 minutes of regular play failed to split the pair. In truth, it was a reasonably dour affair with lots of midfield tussling but not much goalmouth action. And so the players went to shots. Eliot opened his account with a goal from his first shot, then saved Antonio’s effort. From here, things went a little pear shaped for Eliot, however, as is often the case for him in shootout situations. However, he did cling on for a 2-2 scoreline at the completion of the five shots apiece. And so, to sudden death they went. Eliot’s first shot was fired straight at Antonio’s ‘keeper, knocking it away from the goal. Antonio then replied with a deft chip that beat Eliot’s ‘keeper at the near post to take the title. 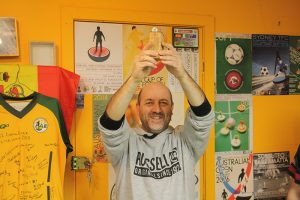 Thanks again to all the players who got right into the spirit of retro fun and fair play that the tournament has come to be known for. A new name on the old trophy is always a great thing as well, so well done to Antonio for joining the elite club. And, to the eternal bridesmaid, Eliot, there’s always next year.