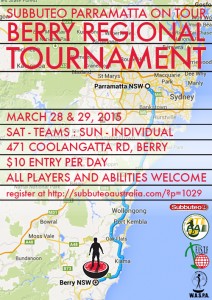 Subbuteo Parramatta is pleased to announce that we will be holding a combined FISTF Satellite/WASPA Regional tournament on Sunday March 29, 2015. In the spirit of spreading the game into the regional areas of Australia, we will be heading down to Berry, two hours drive south of Sydney, for this tournament.

Players of all ages, skill and experience are welcome to enter, and all entrants will play a guaranteed minimum of 3 competitive matches (alongside as many friendlies as you can fit in).

We will be running an Opens Individual tournament. If we have enough registrations, we will also run a separate U15s tournament. Start time is subject to numbers but will be at around 10am-ish. Final confirmation of the start time will be sent in the week before the competition. Entry is $10. All games will be played on Astropitches. 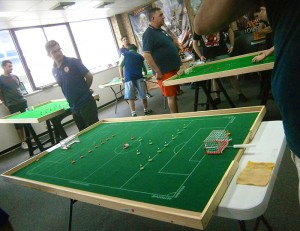 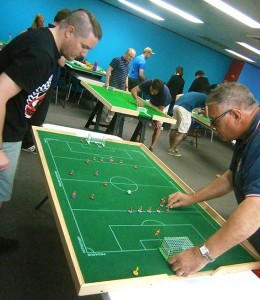 The quarter final pairings made for a couple of straightforward games and a couple of nailbiters. Peter had a comfortable run against Gordy and one of his more outlandish goals was captured in super-slo-mo. Adrian made Robert work hard but the result was never in doubt as Robert dominated and took a 2-0 victory. The two Steves fought out a classic as Steve The Younger, whose game has come on incredibly over the course of the year, pushed Steve The Elder to extra time after a 1-1 regulation time result. In the sudden death period, Steve The Younger gave up possession with his travelling ‘keeper midway through. Steve The Elder managed to get the ball into the shooting zone with his 4th flick, but a great defensive flick from Steve The Younger made Steve The Elder’s shot almost impossible. With the most delicately placed flick, however, Steve The Elder found the millimeters wide gap to get just the right angle and see the ball trickle in the inside of the goal to take the victory. The other quarter final was probably the day’s most exciting game, in spite of a distinct lack of goals. Eliot and Raffaele went at each other for 30 minutes without finding the inside of the goal. The posts and crossbar, yes, but not the back of the net. A further 10 minutes was still not enough to split the two as passions rose further, so shots were called. Both players found their shooting form had left completely as, with a full crowd gathered ’round, every shot of the initial 5 each went either wayward or was saved. As the sudden death phase of the shootout began, Eliot finally found the net to take the upper hand. Raffaele, however, was not about to lay down and drew level with an equally well hit shot from wide. Eliot then slotted his second and the pressure was back on Raffaele. This time, a fingertip save from Eliot’s ‘keeper was to deny Raffaele and Eliot finally took the honours and the last place in the semi-finals. END_OF_DOCUMENT_TOKEN_TO_BE_REPLACED