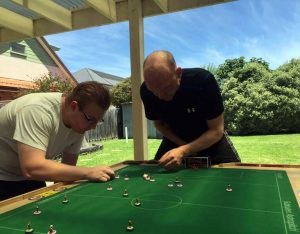 Luke takes on Carl in the sunshine.

Table Football finally arrived to Melbourne’s inner northern suburbs as Preston was the venue for Match Day One of the inaugural Northern Lights Summer League. A field of eight took part in an intense afternoon of Subbuteo as each player competed and pitted their talents against every other competitor. In total, 28 games were held (12 minute halves) as quick rotations from one round to the other became the order of the day.

Match Day One pitted Luke Radziminski against pre-tournament favourite Carl Young. The contest didn’t disappoint with some very impressive open play and although Young took the honours, a last minute opportunity for Radziminski to salvage a point went begging. A fierce and lively contest to open proceedings in what was to become a good example of what was to follow during the remainder of the day’s fixtures.

Paul Mercer put his Gridiron refereeing responsibilities to the side as he re-entered Melbourne’s burgeoning Table Football scene. One of Subbuteo’s early pioneers in Australia, Mercer was the early pace setter on the day picking up three consecutive 1-0 victories (against Grant, Garagounis and Eveleigh) in his opening three matches. It was an impressive start for the veteran and although the ‘Mercer Train’ didn’t go on to pick up any further wins for the day, he continues to remain a formidable opponent. 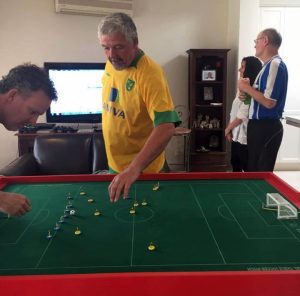 Adrian and Kevin battle it out.

Snapping at Mercer’s heels is Tasmanian stalwart, Adrian Connolly. Another member of the ‘Old Brigade’, Connolly notched up two victories against Simon Briffa and Kevin Grant and secured a further three draws to place him fourth on the standings, only two points behind Mercer. One gets the feeling that if Connolly makes a good start on Day Two, then a podium finish is certainly not out of the question.

Christos Garagounis and Beth Eveleigh must have been separated at birth if the standings are anything to go by. Both competitors finished on six points (acquiring one win, three draws and three losses in the process). A solid defence were distinct features of both their games although there will need to be a reassessment of their offensive approach if they are to threaten opposition defensive structures and make a push up the league ladder during Day Two of the event.

The two newest members in Melbourne’s Subbuteo scene – Simon Briffa and Kevin Grant – proved to be the day’s biggest talking point. It is incredible to see the rate of improvement both players have displayed in their overall game play since entering the picture. Grant has a free flowing (almost nonchalant) flicking technique that will undoubtedly cause higher ranked opponents no end of trouble in tournaments to come. Briffa on the other hand employs a combative approach and is never really ever out of the contest. He was immensely unlucky not to notch up two victories on the day, Garagounis scoring late in their respective contest to secure a draw. 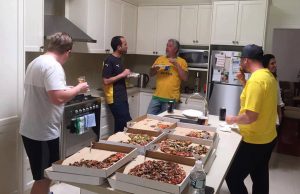 Overall, a great afternoon of Table Football which saw 28 matches played. In total there were 64 goals scored at an average of 2.29 goals per match (or a goal every 10.5 minutes). This clearly goes to show that resolute defences were the order of the day. Although the Premier’s Plate appears to be a two horse race between Young and Radziminski, a couple of upset results on the day will go a long way in determining the final league ladder. Huge interest also surrounds the minor placings as all positions essentially remain ‘up for grabs’. Every player will be determined to bring their ‘A’ game for Match Day Two (on the 28th January 2017) as competitors reacquaint themselves for the thrilling final instalment of the Northern Lights Summer League. 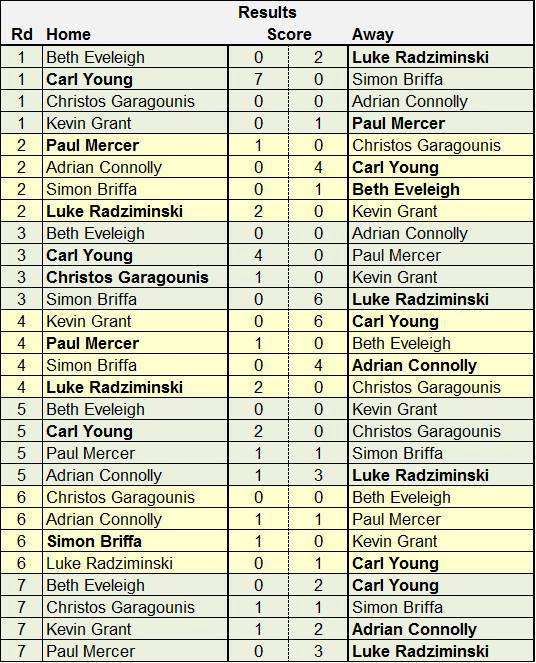