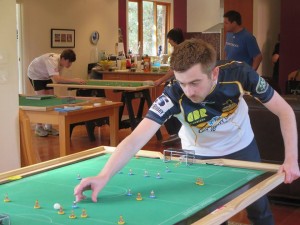 The Subbuteo Melbourne Anniversary tournament was held on the 13th of April 2014- Exactly 1 year after the clubs formation.

A hotly contested group stage saw seeded players Carl Young and Peter Thomas finish on top of their respective groups with Benji Batten and David Simpson (who had both scored against their respective table toppers) also qualifying for the semi-finals.

After the group stage, the competition split in two with Alex Stefanos, Dillon Izon and Peter Lipsett competing in a tight group for 5th Place.

There were no surprises in the semi-finals and so two of Australia’s top players; Carl and Peter would meet in the final.
The final itself was a high quality match in which after 30 minutes and then a further 10 minutes extra time: the scores were locked at 1-1. A great crowd assembled for the shootout in which Peter Thomas claimed the victory with the final shot. (Shootout score 3-2)

Highlights from the tournament are now available