Fabrizio took on Todd In the evening’s first game at Toongabbie West. Fabrizio’s went to half time leading 3-0 against his far more inexperienced opponent. Todd was showing some good flicking skills but was struggling in his attack and sense of positioning. In the second half, Fabrizio was able to close out the game with another two nice shots from the corners of the shooting area. Todd then took on the host, Adam. The first half saw Adam take a 1-0 lead, scoring with a nice shot from distance, something that has become a trademark for Adam. Adam lead confidently but Todd had a couple of good chances to draw. The second half was pretty much the same as the first one but Adam pushed forward to score his second goal and then, near the final whistle scored his final goal with a shot from just outside the penalty area, which he cut nicely onto the post and into the goal to close the match with a 2-0 result. The final game saw Adam take on Fabrizio. From the begin until the end of the match Fabrizio pushed Adam into his area, trying to score as many goals as he could. He finally scored a lucky goal where Adam positioned his defender perfectly but the ball still managed to roll into the goal. After a couple more chances, Adam finally created a chance to draw level, but a post and then the bar of Fabrizio’s goalkeeper somehow kept the ball out, leaving the score at 1-0 at the end of the first half. In the second half, Fabrizio had some more chances to score at least 2 goals but 2 posts, 1 crossbar and a couple of nice saves from Adam left the result at 1-0, though that was enough for Fabrizio to get the 3 points.

Gordy went into a panic attack around midday on Match Day Three – how could he face the might of both Paul and Mat in one evening. A quick excuse of some work function was scrounged together and his apologies were sent. Keen to improve on the automatic 4-0 result that a forfeit might give each of them, though, the two quickly agree to having the games rescheduled to a later date, meaning Gordy will still have to face the music. For tonight, Mat and Paul were still itching for a game, though, so made their ways to the clubhouse for their single fixture. It turned out to be well worth it. Mat took an early lead with a bold shot, only for Paul to equalise before half time, keeping the game in the balance. The second half was more of the same though, this time, Paul was able to put away his chances while Mat couldn’t. Paul’s change of polish since last week enabled his Superfooty bases to move much more cleanly and his more composed play gave him a 3-1 result. 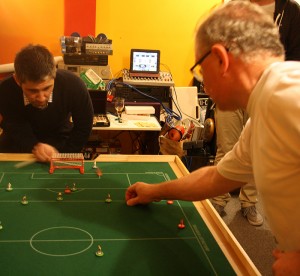 This time Eliot doesn’t score against David, the ball flying back off the crossbar.

On the other table, Adrian faced Eliot in the first fixture. Adrian was determined to keep Eliot out and was disciplined in defence. Eliot dominated possession but couldn’t find a way through. A few counter-attack chances developed for Adrian as the half progressed and Eliot left gaps in his defence as he pushed for the goal but neither player was able to break the deadlock. After the break, Eliot redoubled his efforts and piled on the pressure. Adrian’s ‘keeper was now called into action and a series of good saves kept him in the game. With just over 5 minutes left, Eliot finally got his reward and scored to his great relief. The game finished at 1-0. David then lined up against Eliot and the opening minutes were very promising for him, as Eliot seemed to lose his intensity for the second game. David pushed Eliot around in the attacking half, but couldn’t quite carve out clear scoring chances. It took Eliot 7 or 8 minutes to regain his composure and begin pressing David. His ability in front of goal finally paid off and a quick fire 4 goals saw him take a stranglehold on the game by half time. The second half found David lift, keeping his defence more organised and holding possession better in the midfield. Eliot scored one final goal, however, to make the final result 5-0. In the final game, schoolboy friends David and Adrian faced each other competitively for the first time in nearly 30 years. In a predictably tense game, Adrian dominated possession early, but didn’t create any clear chances. David then came into his own and only some poor final touches meant his great build-up play went unrewarded. In a classic sucker punch, Adrian broke the deadlock 30 seconds after David missed his best chance at the other end, Adrian countering swiftly and delicately chipping David’s ‘keeper with his shot. The second half saw Adrian continue to press but David defended well, until a fatal mistake with his travelling ‘keeper left Adrian in front of an open goal with a simple tap-in to take the game 2-0. 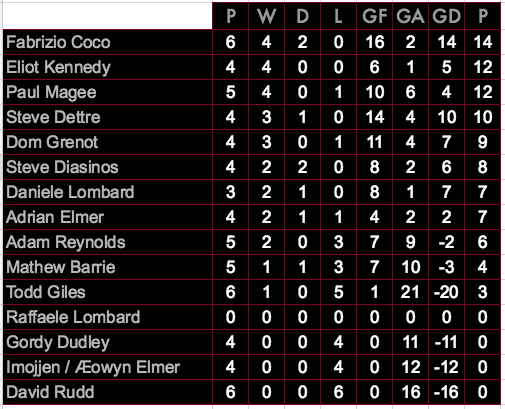 The table at the completion of Match Day 3