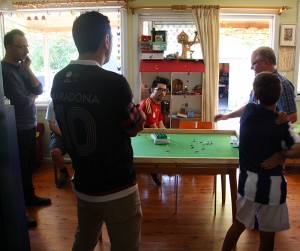 Eliot explains the rules for the benefit of new players.

The September Cup is unique in the Australian table football landscape in that it is the only tournament played entirely with Subbuteo brand equipment – figures, pitches, balls, even goalkeepers. For new players, it’s a good introduction to the game while for older players, memories of a bygone era, complete with skills that are mostly obsolete in the contemporary game, are relived with relish. On the same day that saw a couple of Australian’s take on the might of the world in this year’s World Cup in Italy, the 11th edition of the September Cup saw a good field of players ranging from those with vast experience to brand new players, those eligible for the Veteran’s category through to those still eligible for the U12 category. All competed well and all came away with stories to tell of their highlights for the day. 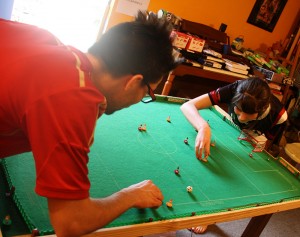 Players were drawn into two groups of 5, with two seeded players in each group. Highlights from the group stage including first time player, Daniel, scoring his first goal and recording his first win, as did the day’s youngest player, Lucas (ironically, against Daniel). Schoolboy rivals, and September Cup regulars Paul and Costa faced each other for a draw which allowed neither of them bragging rights. In her match against Paul, Imojjen spent the entire game on the attack but couldn’t find the goal, only to be undone on the counter in the final minute as she pushed her players forward, Paul taking his first win of the day. After two-and-a-half hours of group games, however, it was the seeded players who all found themselves in the top spots of those groups, a draw between Eliot and Gordy being the result of most note. 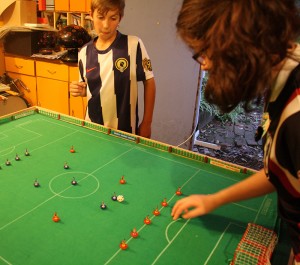 In the Repechage Barrage, Imojjen faced Daniel while Paul lined up against Æowyn. Both games ended in 0-0 draws. As both Paul and Daniel needed to leave early, they each then conceded, meaning the Elmer girls earned passage to the Repechage Semis. Here was where the real action took place. Imojjen and Lucas fought out a tense 0-0 draw, with both coming close to scoring on numerous occasions. In the Costa vs Æowyn match-up, Æowyn took the lead, scoring her first ever competitive goal, and the entire suburb of Toongabbie heard about it!! Her celebration was something to be heard. Unfortunately, she later conceded an equaliser, meaning the game also ended up level. With time running short, all the minor placing play-off games were shelved with the players all very happy to end on equal terms, having achieved their own respective individual achievements along the way.

In the main Semi-Finals, Eliot drew Adrian with Daniele facing Gordy. Both games were tight. Daniele had the edge over Gordy, spending a good 8 or 9 minutes playing a series of corners but struggled to break through Gordy’s dogged defence. In the end, a single goal was all that split the players, being scored to Daniele to reward him for his possessional dominance. In the other game, Eliot was finding himself in an unfamiliar position, needing to do a lot of defending against Adrian. Eliot’s classic 70s Burnley team were producing some exquisite curling flicks that Adrian found impossible to defend and which gave Eliot great satisfaction, but their unreliability on long flicks saw him concede possession regularly. He did, however, take the lead, somewhat against the run of play, before half time. In the second half, Adrian committed extra figures forward and was eventually rewarded with a penalty when a quick play saw him shoot, the gaol bound ball cannoning into Eliot’s hand stranded in the box. Adrian made no mistake from the spot, tying up the game. Which is how it stayed through extra-time, setting up a shootout for the result. Eliot missed his first 3, while Adrian scored his 3rd to take a lead. Eliot then pulled one back with his very next shot, which was followed by an Adrian miss. Eliot couldn’t take the advantage with his 5th shot. Miraculously, Adrian found the far side of the goal with his final shot, giving him his first ever result over Eliot and sending him to a rematch with Daniele in the Grand Final. 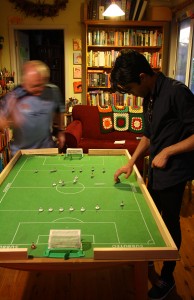 Eliot on the move against Gordy.

In the 3rd/4th play-off, Eliot rediscovered his form and was able to slot a goal past Gordy in each half to take the game 2-0. Gordy was able to stage a fake trophy presentation to impress Little Steve, who was absent for the afternoon, no doubt gorging himself on pavlova. Steve was duly impressed with Gordy’s ‘win’ – who knows if he’s discovered the truth yet!!? The Grand-Final itself got off to an explosive start. Daniele flicked off and within 15 seconds had worked into the shooting area where his shot found the hand of a shell-shocked Adrian, in a reverse of what he had done earlier against Eliot. Daniele calmly slotted the penalty home to take the lead. A tense, tight game was then played out as Adrian sought to get back level. A minute before the break, he finally got on equal terms with a nicely chipped shot. However, following the change of ends, Adrian conceded possession directly from his flick-off. Daniele again raided forward and, again, within 30 seconds was in the lead after a quick attack and well taken shot. Adrian came excrutiatingly close to a wonder-goal equaliser midway through the half but the deftly slotted shooting figure cut the ball just a little too fine and the ball trickled past an unprotected far post. With both players giving everything, Daniele was able to hold on and take the title, becoming the 6th different winner to have their name etched on the famous trophy. The win also means that Daniele moves to the top of the table in the Sydney Premier League after two tournaments. 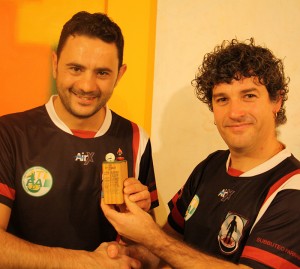 Daniele becomes the 6th player to have his name inscribed on the trophy.

Thanks to all who attended, both new players and old regulars, and enjoyed themselves greatly. And thanks also to the Australian Table Football Association’s new Marketing and Promotion’s Manager, Chris Tanner and his company, Zenith Sports and Events Management who, in an Australian first, live streamed a couple of the afternoon’s games to the wider world.