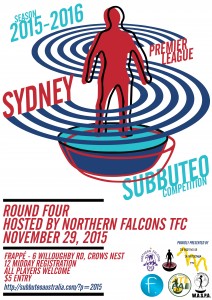 It was a day of comebacks in more ways than one at the Sydney Premier League #4.
Gary Hosie and Harley Ullrich played in their first competitive tournaments for more than 20 years; then Benji Batten staged two remarkable comebacks — first beating Steve Dettre 2-1, then getting a last second equaliser in the final, before succumbing in sudden death to Eliot Kennedy, who had himself fought back in his semi-final. 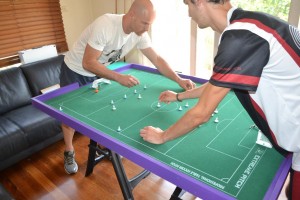 After a short but panicky decision to switch the venue, play took place at Chez Dettre, with a decidedly upstairs/downstairs feel to it.
Once again the Extremeworks pitches showed a dislike for being kept constrained in their tubes, and after a match breathing the rarified air of the north shore (well, the second floor of Chez Dettre), they came to life. 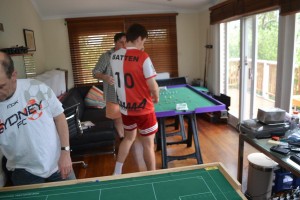 Benji struggled against a determined Simon Cole, while Geoff Sirmai and Johnny Ball revived ancient battles from the 70s in a 0-0 draw. 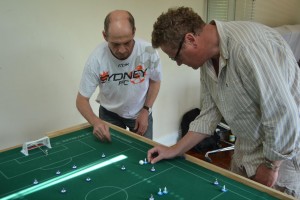 In Group B, Fabrizio and Gary traded blows in a fantastic match, won 3-2 by Fabrizio. Eliot overwhelmed Daniele, who then succumbed to Gary 2-0. Eliot then draw 1-1 with Gary, before beating Fabrizio 2-1. 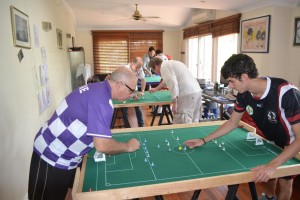 In the last matches of their group, Gary had to beat Harley and hope Daniele could pull out something special against Fabrizio, but Fab put on a great show to win 3-1. 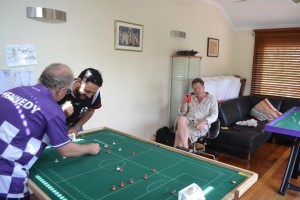 In Group A, Steve took the lead against Benji with a shot on the run, only to see the Melbourne lad return the favour, before scoring a second excellent goal. 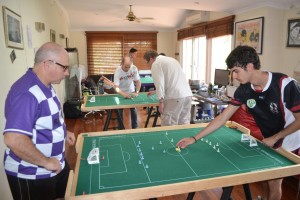 In the semi-finals, Fabrizio was left shocked by some excellent play from Benji, who scored a major upset win 2-0. In the other match, Steve took an early lead, but almost straight from the flick off in the second half, Eliot levelled the scores, then took his chance for victory 5 minutes from the end.
The final was a close tussel. Both players did well in defence, until deep in the second half a crucial defensive mistake opened up Benji’s defence and he was punished.
Counting down the seconds, Benji threw caution to the wind, and literally with the last flick he equalised with a sweeping move.
But a calmer head from Eliot was the edge, and with just under two minutes in extra time, he blasted the winner.
Congrats to Eliot and Benji, and great to see Gary and Harley back in action.
Thanks to everyone for accommodating the venue change. 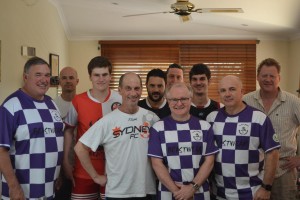