The 1st anniversary of Brisbane Subbuteo Club was played in sweltering conditions, the high humidity had the players sweating, and the pitches playing incredibly slowly, similar to a water logged pitch in real football, but the 5 competitors played on, and after a birthday cake treat, managed to get through the afternoons fixtures.
Rik Bland retained the trophy for the 3rd time in succession with his Profibase C3 Cameroon team, but it got mighty close….
The initial round of games saw Andrew Bennett dispatch with recent Sydney ATFA WASPA winner Giuseppe Tardiota by a scoreline of 4-1, both would make the semi finals along with Rik Bland and Gus Gillespie. 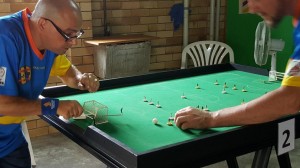 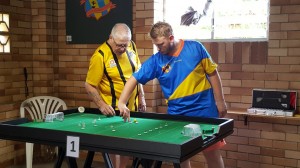 SEMI FINALS
Rik Bland 3 – 0 Giuseppe Tardiota
Rik went straight for the throat in this fixture between current Brisbane champion v current Sydney ATFA, WASPA champion, taking a 3 nil lead into the halftime break. Perhaps Giuseppe was still recovering from the big tournament a week earlier, and was a bit off his game today, having taken the big trophy 7 days ago.
Andrew Bennett 0 – 1 Gus Gillespie
A tight semi final between the 2 guys, saw Gus edge past an unusually defence minded Andrew by the narrowest of scorelines, setting up his first final appearance in 6 months.

FINAL
Rik Bland 3 – 2 Gus Gillespie (aet)
With conditions being far from ideal, the pitch was playing very slowly, and player’s runs were more like short bursts and sudden stops, which led to a lack of quality, but a test for each player equally. Rik had some terrible moments with the spare GK, which led to the first goal for Gus, when he casually worked the opportunity to score effectively an open goal.
Rik managed to reply with an equaliser midway through the second half, and despite more crazy goalkeeping, the final entered extra time.
Midway through extra time, Gus got into a great position, and managed to dink the ball over the dive of Rik’s GK, to lead 2 – 1.
With a little over a minute left on the clock, Rik found a way through the defence, and dispatched a shot into the net, to his great relief.
From the restart, Rik quickly regained possession, and with seconds remaining, got into a goal scoring position, and found the bottom corner to steal the trophy in the last couple of minutes, and Cameroon have a 3rd consecutive title.
Gus was left to rue yet another defeat in the dying stages of a match, an all too familiar situation for ‘the magpies’, his request is to have all matches 14 mins per half from now on! 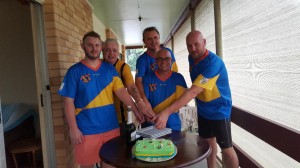 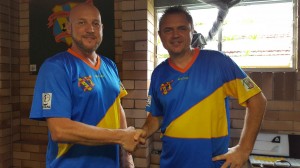 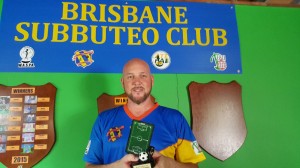