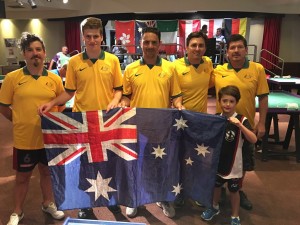 The drama of the Australian Grand Prix 2016 almost overshadowed an important milestone in Australian Subbuteo, but not completely. At the end of the Sunday action, two internationals were staged, with ‘A’ and ‘B’ teams from Australia and Singapore facing off. 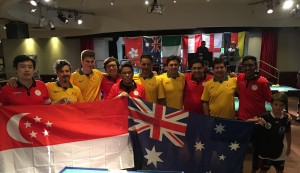 The two B teams

And Australia scored its first home win in the ‘A’ match, beating Singapore 3-1 with wins to Peter Thomas, Carl Young and Robert Green, while Fabrizio Coco narrowly went down 0-1 to Rudy Hesty. 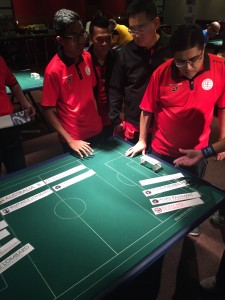 Played in a great spirit, after the dramas of last second wins in both the individual and teams events, the matches reaffirmed the great spirit and bond between Australian and Singaporean table football.
In the ‘B’ international, Singapore came out on top, with a number of tight matches. Raffaele Lombard got the lone point for the Aussies, while debutantes Daniele Lombardi and Adrian Elmer/Paul Magee lost narrowly and Benji Batten went down fighting in the 3-1 loss.
The matches pushed Peter Thomas to the top of the all-time lists for most wins (2 from 2), and saw him edge closer to Anthony McMillan’s record of 9 goals from 5 matches.
Eliot Kennedy remains the most capped player, with 6, including 5 in the 90s.

To see the full results of these games and all of Australia’s international fixtures from the past, click here.