Right smack the middle of the Euros and Copa tournaments, surely the next biggest event on the football calendar was the Inaugural Ipswich Cup, hosted by the Ipswich Kestrels Table Football Club.
With a couple of Ipswich regulars not playing but on the sidelines cheering, the competition got under way with 5 starters. These included Ipswich members, Ian Garred, Rob Bennett, Andrew Bennett and a couple of Brisbane SC visitors – Rik Blank and Giuseppe Tardiota.
The format took the form of a group stage with the top 4 to progress. Things got off to a cracking start with last month’s BSC contenders Andrew and Rik facing off in the first round with Rik dominating 3-0. The other tie saw Ian take out a tight win against Rob 1-0.
Round 2 saw the Brisbane boys, Rik and Giuseppe take on Ian and Rob with both games going in favour of the BSC members 2 goals to nil.
Round 3 had both games decided by a 2 goal margin with Giuseppe beating Ian 2-0 in a fiery affair and Andrew beating Rob 3-1. Despite only scoring 1 goal in the game, Rob showed a returning quality in the game, scoring possibly the goal of the day with a scything effort between 2 figures from somewhere near halfway, rendering Andrew’s keeper utterly useless after crashing off the crossbar into the back to the net.
Round 4 threw up another couple of cracking games, and despite Giuseppe having the better of the ball, Andrew managed to get over 2-0. The other game featuring Rob and Rik was superb, worth the price of admission alone. Rik managed to score late to level the match 3-3 however Rob showed that when he gets in front, he leads well – being 2 nil up for most of the game.
At this stage the final 4 was decided but the final positions were still to be decided
The final group round saw Ian going down to Andrew 3-0 to guarantee Andrew 1st spot in the group, with the BSC lads playing each other with Giuseppe upsetting the inform Rik with a 2-1 victory in a typical cagey Italian v English affair.
So with the groups stages out of the way, the semi-final games saw a rematch of Round 5. Andrew again dispatched Ian 3-0 however this game being much tighter than the previous despite the score line. A couple of quick goals either side of the break was enough to see Andrew though. In the other match it was Rik extracting revenge for the earlier defeat with a 1-0 with over Giuseppe, who conceded early and spent the game chasing a goal.
So the final came down to Rik vs Andrew, possible the 2 clubs inform players, recently contesting victory last month at BSC. The head to head between the 2 players tells a different store however, with Rik defiantly having the wood on Andrew. The final saw the game played on the brand new Extreme Works pitch and the new Ipswich Clubhouse.
The match started at a fast past and did not let up. Rik constantly attacking and Andrew constantly under pressure at the other end, with very little in the way of chances of his own. Rik peppered the goal and was unlucky not to be a couple up at the break. The second half saw much of the same, loads of pressure from Rik, and with Andrew expertly parking his Chelsea bus across the laneway at the other end, Rick was unable to break through. In almost cynical fashion, Andrew broke down the right wing with 30 seconds left on the clock, and fired a shot home in to the top left corner of Rik’s net. It was brutal for one, and joyous for the other, however at the end of a day, an absolute cracking game.
Ipswich would like to thank the Brisbane Subbuteo club for making the journey for the inaugural tournament. The next event will be in July so be sure to keep an eye out for dates. 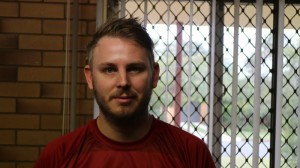