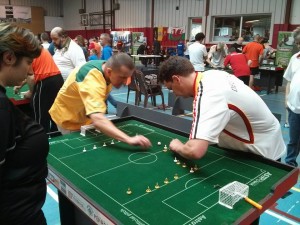 It has been an incredible twelve months of growth for table football in Australia, with both new players arriving and big names from the past re-emerging. We have had multiple WASPA tournaments taking place in both Sydney and Melbourne, we have established a new association which has been recognised by the world governing body FISTF. We have also developed exciting plans for the next season including FISTF tournaments and an Asian Cups event. To cap this great season for Australian Table Football off in style, Peter Thomas and Robert Green represented Australia at the 2014 FISTF World Cup in the delightful Belgium town of Rochfort.

A world cup in Belgium is always a very special event. It is of course one of the great Subbuteo nations, producing great Subbuteo players in the past, such as the Demarco brothers, Gil Delogne and David Ruelle, along with countless others. It has also given us two people who have over the years shown a remarkable level of commitment to developing table football: the ever committed Vincent Coppenelle, and Olivere Pere. Rochefort itself is home of the renowned Rochefort Subbuteo Club. With such great experience and a depth both talent and history, this was always going to be a great world cup, and Belgium lived up to expectations, organising a great tournament on great equipment. 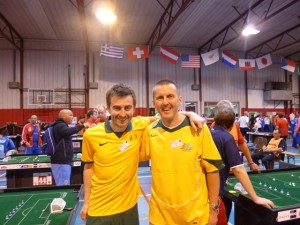 As Australia only had two players participating in this world cup, playing was limited to the Open (Peter Thomas) and the Veterans (Robert Green) individual competition. The standard of play at the world cup is exceptionally high, and both Peter and Robert were under no illusions about the task in front of them.

Peter Thomas was drawn in a group with Marcus Tilgner (Germany), Paulo Gouveia (Portugal), and Christophe Dheur (Belgium), with Dheur being the seeded player. There are no easy groups at the world cup, but this was definitely not one of those killer groups, or ‘groups of death’ as Steve Dettre sometimes refers to them, and Peter fancied his chances. In his opening game against Marcus Tilgner, Peter went 1-0 down within the first two minutes, and Marcus was getting the better of play. Having steadied his nerves Peter started to get a bit more possession and had some good chances saved. With just four seconds to go Peter took a corner and hit the ball slowly across the penalty area. With the ball still just moving very slowly Peter blasted a man down from midfield to hit the ball on the run and into the back of the net. A screech of ‘Allez’ in Peter’s very best Middlesbrough-Australian accent ensured all were well aware that the score was 1-1 at half-time. The second half was quite a different game, with Peter capitalising on a number of mistakes made by Marcus. A second goal for Peter came after 20 minutes, and Peter finished off proceedings with a third goal two minutes from time. The other game in Peter’s group between Christophe Dheur and Paulo Gouveia ended in a 1-1 draw, which could have well have gone Paulo’s way if he’d converted a late chance towards the end of the game. 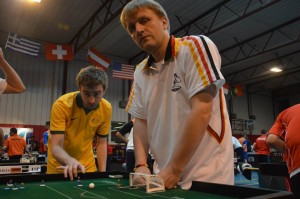 The second round of group games in the open category saw Peter take on Paulo Gouveia. This game was a very tense affair, with both payers squandering early chances, and making good use of their goal keeper. With just 20 seconds to go before half-time Peter did some of his trade-mark terrible defending for which he has become so famous and renowned for over the years and let Paulo in to score, 1-0 at half-time. Paulo kicked off in the second half, and slowed proceedings down somewhat, keeping possession for the first eight minutes of the second half. Desperate to try and get the ball and at least have a chance at equalising Peter opened his defence up and chased after the ball. This roll of the dice did not pay off, and Paulo took advantage and scored a second goal to win 2-0. Christophe Dheur despatched Marcus Tilgner 4-0, making the final game for Peter a must-win match.

In his final group game Christophe Dheur gave Peter a good lesson in defending, attacking and everything else in between. Peter was two zero down at halftime and had only a couple of half chances saved by Christophe. The second half was not better, with Christophe continuing to find the back of the net a further three times. One might complain that the goal keeper was not doing a good job, but in actual fact if it had not been for the new ridiculously oversized goalkeeper purchased that morning Peter would have been even further behind with the keeper pulling off multiple other great saves. A few minutes from the end of the game, Peter kicked off and went straight through the centre of Christophe’s defence scoring in just three flicks. A late consolation goal to reduce the impact of the humiliation. In the other game in the group Marcus Tilgner showed why he’s a well-respected player by beating Paulo Gouveia 4-3. So it turned out be quite and up and down group. So after three games Dheur finished top of the group with 7 points, Gouveia second with 4 points, Thomas third with 3 points, and Tilgner in fourth also with 3 points but with a worse goal difference. If Peter had just held on for a few more seconds before half-time against Paulo Gouveia then it could all have been a different story. That’s Subbuteo!

Australia’s other player at the world cup, Robert Green, played in the Veterans category (over 40s). Robert lost 6-0 to Antonio Montaño (Spain), 3-1 to Thomas Vulpes (Germany), and 2-0 to Patrick Dean (Gibralta). Further details will be posted on Robert’s games.

During the rest of the two days Peter and Robert played multiple friendly matches against other players, including players from Singapore, Japan, the United States, and the Czech Republic, amongst others. This was a great opportunity to invite players to the forthcoming table football events in Australia planned for the 2014-15 season.

The big talking point of the first day’s play was the late arrival of former world champion Carlos Flores. A late flight arrival meant Flores missed his first game against former world champion Masimo Bologino, and forfeited the match 3-0. With other games in the group not going his way Flores finished third in his group and exited the tournament. Despite the exit of Flores Spain was to produce a third world champion, with Juan Manuel Noguera beating Sérgio Ramos 3-0 in the open final.

The team event at a world cup is always a very special and noisy occasion. More than ever players get vocal with loud shouts coming with every goal. With passions running high and players committed to doing their best for their country these are often tense times. That said, it was exceptionally disappointing to see the behaviour of the Greek veterans team causing undue disruption within the room. This is not a good advert for our game. Congratulations to Chris Thomas the referee in the game in question for keeping a calm head and dealing with the situation professionally.

The team event in the open category between Italy and Spain was a classic match. Spain had three open category world champions in their team, whilst Italy have long ruled this competition, with their name dominating the engraving on the trophy over the last 20 years. Spain led the match from pretty much the start and looked set to win. A very late goal in a crucial game put the match into extra time, where Italy snatched victory with Luca Colangelo scoring against Carlos Flores to lose his own match 5-3, but ensuring Italy beat Spain on goal difference. A video of the incredible end to the match will be uploaded here in the coming days.

Thanks to all that made this such a great world cup, hopefully we will see more Australian players and an Australian team at the world cup in the coming years. And thanks to all the players in Australia, new and old, old and young, for providing the match practice and encouragement over the last year.