The women’s event kicked off the weekends’ festivities.  It was contested between Beth Eveleigh of the Northern Pheonix and two Western Flickers TFC Members – Juliette Browne and Charlotte Wright.

A tightly contested round robin league ensued.  Beth drew both her games 0-0, meaning that Charlotte’s 1-0 win over Juliette in the final game decided the proceedings.  Charlotte took out her first FISTF title, with Beth runner up, and Juliette third. 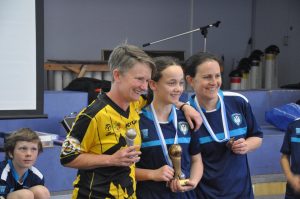 Beth Eveleigh (runner up), Charlotte Wright (Champion) and Juliette Browne (3rd) with their awards from the Women’s FISTF IO

The junior event was contested by 8 players in two groups of four.  The top two from each group progressing to the FISTF IO semi finals.

Benjamin Ng and top seed Gabriel Lombard early on showed they were the players to beat in this competition and took out their respective groups.  Charlotte Wright backed up her win in the Women’s event with a strong showing to progress from her group to the semi finals and defeating the vastly improved Aidan Deverell in the 3rd /4th playoff.

In the final, Gabriel played some quality Table Football but it was the killer instinct in front of goal that proved the difference with Benjamin Ng winning the Junior title 3-0. 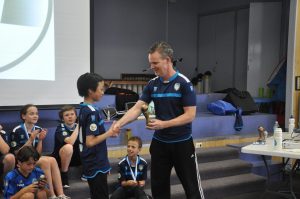 The junior WASPA was held for all those eliminated from the FISTF event.  Second seed for the FISTF Junior competition, Billy Wright, overcame his disappointment at elimination from the main event to make the final but didn’t join his sister on the winners’ list, going down on penalties to promising debutant Liam Browne in the Junior WASPA final.

The Melbourne IO Event also saw the debut of the Power Rankings to decide the outcome of a WASPA tournament.  The rules were:

– 1. Players not occupied referreeing the Junior, Women’s or Teams events on the Saturday were free to organise themselves games on the spare tables and record results.

– 2. The final standings were made using the new Power Rankings system given that not all players played a similar number of games, or games against players of the same standard.  Only results on the day counted.  A win over a player who had performed well on the day was worth more than a win against a player who was winless.

– 3. All enquires on how Power Rankings are calculated should be directed to Richard Wilson.

The completion was narrowly taken out by Raffaele Lombard from Eliot Kennedy and Giuseppe Tardiota in a good indicator of players to watch in the main Open event on Sunday.

Sixteen players competed in the Melbourne IO.  Top seed Raffaele Lombard and third seed Eliot Kennedy would have been more pleased with the draw than second seed Benny Ng or fourth seed Steve Dettre, and it would turn out to be the case.

In Groups 1 and 3 Raffaele and Eliot cruised though their group games, with Eliot particularly impressed with three 5-0 victories.  Steve Wright progressed in second place in Group 1 on goal difference with his final round win over Juliette, whilst Kevin Grant went through in second place from Group 3 by defeating the 2018 Melbourne IO Junior Champion Benjamin Ng in the contest of that group.

Groups 2 and 4 were both wide open going into the final round of fixtures.  Second seed Benny Ng was at risk of not progressing after letting a 1-0 lead slip against Giuseppe Tardiota to go down 1-2.  Benny needed to defeat Luke Radziminski or hope his club mate Charlotte Wright could do him a favour in the final round of group games.  In the end Luke and Giuseppe got the results they needed to progress, with Luke topping the Group.  Prior to the event, several good judges saw Luke as a dark horse to take out the title and by topping this “Group of Death” this appeared to be the case.

Group 4, the “Presidential Group”, pitted fourth seed FISTF President Steve Dettre, ATFA and Western Flickers TFC President Adrian Connolly, Northern Pheonix President Christos Garagounis, and Adam Deverell.  Adrian put himself in a good position to progress with a 1-0 win over Adam thanks to a goal in the dying seconds of their first round clash, whilst Steve took the pole position expected of the seed going into the final round thanks to a big win over the luckless Adam. Christos drew his clashes with Steve and Adrian and as such needed a win in his final game against Adam, possibly by two goals, to progress.  However, it was not to be with Adam doing his club President Adrian a favour by defeating Christos.  The clash to decide the group winner was one of the games of the event.  Steve took the lead early, but Adrian responded immediately with a goal from the kick off possession and then scored a second goal soon after to take a 2-1 lead.  However, with seconds remaining, Steve drew level with the final action of the first half to tie it up at 2-2.  The second half was much tighter. Ultimately a relentless sequence of corners by Steve Dettre creates the decisive opening for the third and winning goal that saw Steve take out the Group.

The first two games went comfortably I the in form seeds Raffaele and Eliot.  However, in the other games Giuseppe showed his improvement from his time in Italy to overcome Steve Dettre; whilst Adrian Connolly caused an upset by defeating Luke Radziminski 3-1.  This meant 2nd in Group 2 had eliminated 1st in Group 4, whilst 2nd in Group 4 had eliminated 1st in Group 2.  Given both Giuseppe and Adrian only progressed at all from their groups by virtue of results in their final group games this demonstrated how tightly contested this half of the draw was.

The semi finals therefore featured players from each of the three states competing – NSW, Queensland and Victoria.  Given Adrian’s Tasmanian origins and his decade living in WA it could be argued that the semis truly had a National feel.

In the first semi final Raffaele extended his run to 5 games without conceding a goal to go through to the final with a 2-0 win.  Whilst in the other clash Eliot capitalised on some defensive blocking errors to take a commanding 3-0 half time.  In the second half Adrian became the first player to put one last Eliot’s keeper.  A gripping end could have been set up had Adrian taken a good chance with a minute to go, but a good save by Eliot saw him also comfortably progress to the final 3-1.

The final was therefore contest between two of the travelling contingent from NSW.  The high quality game was streamed live in high definition with the latest technology – timber, rubber bands and an iPhone!  Eliot took an early lead but the top seed Raffaele responded well to equalise and then take the lead. Eliot found the net a second time with a great finish prior to half time but unfortunately the goal was ruled out in what later found to be an error by the referee.  Eliot as always showed why he is such a respected player with the way he handled the decision.

The second half saw Eliot needing to chase the game and in the last minute he had a good chance to score but sent his shot narrowly wide.  Raffaele then attacked and scored a third goal in what would be the last action of the contest. 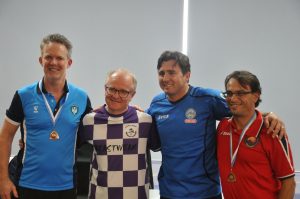 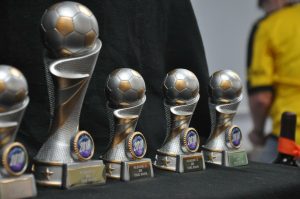 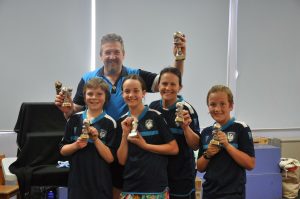 To ensure the WASPA was complete prior to the FISTF IO Final, the format was a straight knockout competition with 2x10min halves and penalties (no extra time).  There were 9 competitors in the WASPA Plate Event, with the previous days’ junior runner up Gabriel Lombard joining the 8 players eliminated from the FISTF Open event.  Gabriel played Charlotte Wright in the barrage.  After a scoreless draw Charlotte won 2-1 on penalties to move into the quarter finals.

In the quarter finals, Charlotte continued her impressive run of results by defeating Adam Deverell 2-1 on penalties.  This set up a semi final showdown with her brother Billy who progressed after Beth Eveleigh needed to forfeit due to illness.  Benny Ng accounted for Christos Garagounis to set up a clash with his son Benjamin in the other semi final after Benjamin defeated Juliette 1-0.

In the battle of the Wrights, it was Billy that prevailed 2-1 on penalties after a scoreless draw.  In the other semi Benjamin continued his run of wins over his father to progress to the final 3-1.

The final saw two of the Western Flickers’ juniors battle it out for the WASPA Open win.  In the end the FISTF Junior IO winner,

Thank you to all the travelling contingent from interstate who added so much to the atmosphere and the quality of play.

A special thanks must also go out to all those involved in organising the event:

Juliette Brown for obtaining the venue

Kevin Grant for all the hard work moving the boards to the site (the boards of which he of course has made himself!) as well as his ingenuous “camera stand” for the live stream.

Beth Eveleigh for again running the best raffle!  Great prizes and a great little fundraiser to help with costs to keep fees down.

Adam Deverell for the BBQ.

The clubs and players that made their boards available

MTFC for use of their umbrella for the WASPA on Saturday.

All players for stepping into their referee duties when asked, including the visiting Carl Young who walked in to watch at the wrong time when we were one short!

Paul Mercer for his great tournament template to record the results and run the event.

Richard Wilson for use of the Power

And finally a pat on my own back for keeping you all on track to finish 10mins prior to my schedule on both days, and somehow not losing any of the competition match balls!  Just don’t mention my ability to count to four in the final ?