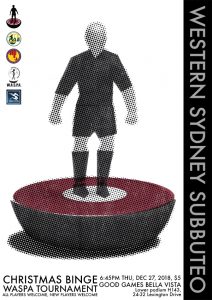 With bellies full from Christmas and Boxing Day feasts, and with players needing to begin their preparations for the upcoming Australian Grand Prix, it was a sizeable crowd that rolled up to Bella Vista Good Games on a warm Thursday evening, with representatives from all four Sydney clubs. A last minute realisation that there was a lack of goal posts meant that only 3 of the 6 available pitches could be utilised (we live and learn!) so the 10 players were split into 3 groups, rather than the preferred Swiss System which had been planned. An unseeded draw threw up a number of interesting match ups.

In the group stage, both Hermann Kruse and Fabrizio Coco made light work of Adrian Elmer. They finished equal on points after drawing their opening game against each other, but Fabrizio finished in top spot as he hammered Adrian while Hermann could only beat Adrian comfortably. Group Two saw Oliver Ollnow continue his recent run of great results, easily topping his group which featured Dave Sultana and new Sydney TFC recruit, Leonardo Nizzoli. Meanwhile, the 4 player Group Three saw the incredibly unlucky Geoff Sirmai finish in 3rd spot, in spite of amassing 5 points in going undefeated – Both Eliot Kennedy and Steve Dettre also finished on 5 points but had better goal differences than Geoff. Daniel Sirmai was the unfortunate victim of the top 3 players’ quest for better goal differences.

In the Repechage section, Adrian saw off Daniel 2-0 while Geoff had the same result against Leonardo. In the Repechage final, Adrian attacked for much of the opening phase, before Geoff came into his own in the latter stages. Neither player could, however, break the other’s defense and so a 0-0 result saw the two share the consolation category.

The Barrage saw Hermann score an unexpected 2-1 victory over Eliot, though Hermann’s recent form means that this probably shouldn’t have been a huge surprise. meanwhile, Steve and David fought out a dogged 0-0, Steve eventually coming up trumps, 2-1, in the shootout. The Semi-final between Fabrizio and Steve was tense for the opening 5 minutes, with neither player taking the upper hand. In a flurry over the next five minutes, however, Fabrizio gained a 2-1 advantage as both goals saw excellent opportunities converted. A late 3rd goal confirmed Fabrizio’s passage to the final. The father and son match-up (Hermann v Oliver) in the other semi, saw Oliver revert to the 9-1 structure which had served him well in his recent Falcons’ WASPA tournament win. Hermann huffed and puffed but struggled to break down Oliver’s dogged defence until later in the game. Hermann then rode out a scary stranded traveling ‘keeper moment to hold on for a 1-0 victory.

The final, therefore, saw the two opening game, Group One combatants, meet up again. While they couldn’t be split in their first encounter, Fabrizio had obviously warmed up by now. His two unanswered goals gave him his second tournament win for the month.

Thanks to all who turned up and enjoyed yet another hard fought, friendly bunch of games. Thanks, as ever, to our great hosts, Bella Vista Good Games. A happy new year to all with lots more table football action in store.

For full results, go to http://subbuteoaustralia.com/wp-content/uploads/2019/01/2018-wss-christmas-binge-waspa.html