The Australian table football community lost one of its own this month, when Brisbane Subbuteo Club’s Chris Scoles succumbed to cancer.
Brisbane’s Gareth Whalley updated us on Chris’ passing.
He was diagnosed in May, but he still battled on and took part in their August tournament.
“He was on about coming to September if we could get a reclining sunlounger for him to rest in during breaks, but he couldn’t come as he’d taken a turn for the worst,” said Gareth.
“‘My last contact with him was about a week and half ago,” Gareth said.
Chris passed away on Saturday, October 5.
The Australian community passes on its condolences to his wife Claire, kids Diamond, Xavier and Eden, and his stepkids Max and Lucy.
Chris was buried on Monday.
Vale Chris.
Keep on flicking. 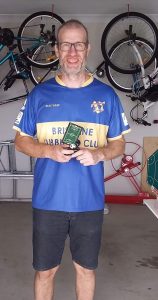