A small but quality field of players assembled at the Louis Joel Art & Community Centre in Altona Beach for the return of FISTF events to Victoria for the first time since the 2020 Australian Grand Prix held just prior to the beginning of the pandemic reaching Australian shores.

The first round of games set the scene for the day with a series of close games.  Adrian Connolly held Eliot Kennedy and Nathan Urbaniak almost pulled off an upset against Luke Radziminski, leading 1-0 at half time before the result also finished all square.  In the other group, Chris Bowen came back from a goal down to defeat Benji Batten 2-1 in what would be a crucial result in Group A.  Peter Thomas scored a goal late in the first half against Beth Eveleigh to take the pressure of before hitting his stride ominously in the second half to win 4-0.

The second round of games saw Luke and Eliot take a box seat for a place in the semis.  Eliot defeated Nathan 4-0 and Luke defeated Adrian 3-0 after Adrian hit the self-destruct button in the first half with a remarkable own goal!  Peter Thomas locked in top spot in Group A with a 2-0 win over Chris Bowen, a result that would be repeated later in the final, whilst Beth pushed Benji all the way before eventually going down 0-1 to a late winner.

In the final round of group games, Peter stormed home with a 5-0 win over Benji who by know was cursing his luck in the group of death!  Chris Bowen cemented his spot in the semis with a 2-0 win over Beth.  In the other Group, Luke gave Adrian and Nathan some hope by going to a commanding 3-0 lead at half time against Eliot.  However, despite peppering Nathan’s goal Adrian could find the back of the net.

The semis pitted Peter against Eliot, and Chris against Luke.  Peter’s attacking prowess and amazing shooting proved the difference against Eliot, progressing to the final with a 3-0.  Luke took Chris to extra time with a late equaliser, before succumbing to a golden goal winner.

The final saw Peter continue his impressive form, beating Chris 2-0 to take out the title without conceding a goal whilst also scoring tournament high of 16.  Chris’ friendly manner and high quality play was a welcome addition to the Melbourne table football scene.  We hope to see more of him now that he has moved here from England.

In the WASPA Consolation Plate event, the semis saw Adrian defeat Beth 2-0 and Benji defeat Nathan 2-1.  In the final, Adrian took a 1-0 lead on the counter attack and almost held on for the win before Benji got a deserved equaliser with 30 seconds to play.  In a dramatic penalty shootout, Adrian eventually became the victor 3-2 in sudden death shots. 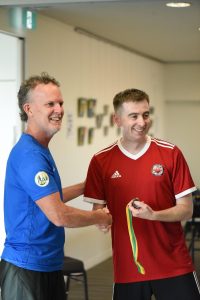 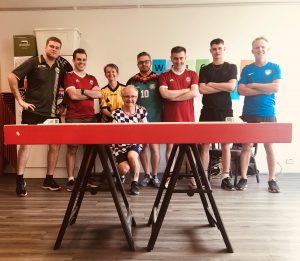