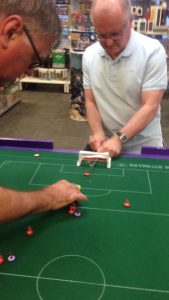 Tony Credentino had a minor marathon at the Falcons’ end of town as he played consecutive games against Eliot Kennedy, Harley Ullrich and Hermann Kruse. It was an inauspicious start, as Eliot put 5 past him in the opening game. Of course, Tony is not the first to succumb to such a scoreline against Eliot and he certainly won’t be the last! By his next game, though, he was warmed up and scored a hard fought 2-0 victory over Harley. Harley later commented on Tony’s brick wall defines – the foundation of his victory. The final match was a more open affair as Tony and Hermann traded goals to finish up sharing the spoils at 2-2.

Out in the Western Suburbs, Steve Diasinos made his first appearance, playing out two 1-1 draws. The first saw he and David Sultana, with their similar playing styles, cancel each other out, while his clash against Mat Barrie renewed a long rivalry with neither being able to grab the bragging rights. Jordan Kolaczyk continued his learning curve, going down to David and Mat respectively, but picking up many pointers along the way. Later in the week, Adrian dropped in at New Trafford to play a catch-up against Mat, taking a 2-0 win in a game that was much tighter than the score would indicate.

Northern Falcons finally gave out hope of replacing two players who had had to pull out after the first match day, so their reduced numbers meant that no matches were played on match day five. Back at the Subbuteo Parramatta Clubhouse, Paul Stockbridge was up against it, losing his 3 consecutive matches, but with all his opponents noting his improvement over the course of the league, particularly in his tactical understanding. Steve Diasinos had no answers against Paul Magee though had to admit that even he enjoyed the match, in spite of the 3-0 scoreline. He turned the result around in his second game, against Adrian Elmer, however. Numerous attempts on goal did nothing but underline the poor quality of Adrian’s shooting as he blazed away without result. Meanwhile, Steve was clinical, slotting a goal in each half for the win.

Wishing to catch the Socceroos match against Japan live on TV, the Falcons convened a little early, playing just a few of their remaining games. The top of the table clash saw Eliot Kennedy race to a 3-0 lead by the break. Not one to roll over, however, Steve scored with 7 minutes to go, then put another one away to make for some nervous moments for Eliot, who managed to hold on for a 3-2 win. Eliot then dispatched Simon Cole 3-0 before heading off to the pub. Meanwhile, Johnny Ball and Tony Credentino battled out an open, but fruitless, 0-0 draw. 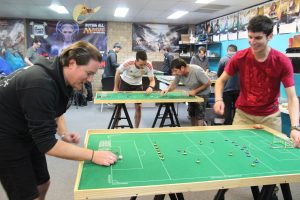 Steve, Fabrizio, Dave and Paul at The Games Cube in Parramatta

What was originally planned as the end of league grand finale for Subbuteo Parramatta turned into only a handful of matches, due to late muscle tears and parental illnesses taking the attention of a few players. With the big event, therefore, pushed back a week, 5 players were still free to play a few fixtures. Fabrizio got off to a flyer against Adrian and had a 4-0 lead by the break, with Adrian reminding Fabrizio of the 5-0 mercy rule. The second half was a different affair, however, with Adrian taking advantage of the downhill slope to finish with the (ever so slightly) more respectable scoreline of 4-1. Dave and Paul Magee battled out a very entertaining 0-0 draw, neither player able to take a stranglehold of the close match. Meanwhile, Fabrizio opened his account against Steve in the first 30 seconds and looked to be heading to another big win. Steve was made of sterner stuff, though and, defending stoutly, ‘keeping majestically and offering quite a bit on the counter, he pegged Fabrizio back, the score staying the same until the break. Early in the second half, after all the hard work getting back into the game, Steve allowed Fabrizio in for a relatively soft goal to ease the pressure. The game remained tight, though, with neither player troubling the scoreboard further. Finally, Dave and Adrian exchanged blows in the final match. Another even battle could have gone either way. Adrian had the game’s only clear cut shot on goal, spraying his shot across the goal. Both defences were excellent, though, meaning that neither could make the break through, the 0-0 result a fair indication of proceedings.

With both clubs now having just one week of their leagues left, final standings are on the line. Steve will need two big wins and hope that Johnny can do him a favour against Eliot in the Falcons’ league, while Fabrizio has all but secured the title at Parramatta. The minor placings are still very much up for grabs, with 6 players still in the running for the other two top 3 spots, which would qualify them for the 1st Division as the two clubs join together the following week. A series of games between the newer players at the foot of the table will also go a long way to deciding who has made the best progress in their first league. 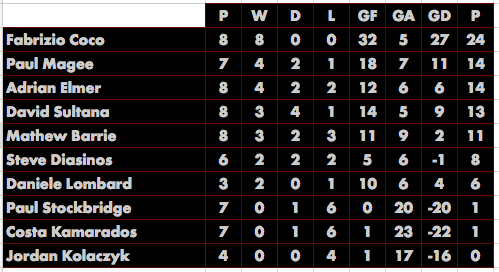