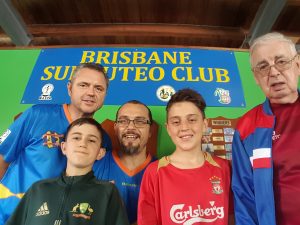 It was a typical Queensland day, just a week and a day before Christmas, hot and humid, and a few faces missing due to ‘that’ time of year.

We did have however, our oldest player and our two youngest as well as Giuseppe and Gus. Last months, and the month before winners were away busy, so it was going to be a new face with the trophy.

The first round saw the two Gillespie Jnr’s facing the big guns of the day, and both did quite well, Wil losing 3-1 to Dad, and James losing 2-0 to Giuseppe.

Rob then had his first game and saw off the youngest member 2-0 though James had more up his sleeve. Giuseppe and Gus fought out a frenetic thriller with Gus edging it 5-4.

The 3rd round had no upsets, as Gus beat Rob 4-1 and Giuseppe beat Wil 5-0. The 4th round however did have an upset, Giuseppe beat Rob 5-0 but James came back from 1-0 down to beat older brother 2-1 with two well taken goals.

The final round saw Wil beat Rob 3-1 and James lose 10-2 to his Dad, who just couldn’t miss, though James did make a few good saves.

So with the format on the day being the top 2 teams play off in a final, it was no surprise to see Giuseppe play Gus. Gus took an early lead, and then extended it to 2-0. Giuseppe got one back only for Gus to break and regain his two goal lead.

So the second half saw Gus kick off leading 3-1, Giuseppe pressing and Gus holding on with some frantic defending. As the time ticked on, Giuseppe made a break through and scored to make it 3-2. Typically Giuseppe has beaten Gus in the final minute, so when Gus responded quickly and made it 4-2, he was a very relieved man indeed. Shortly after the final whistle blew and Gus had won his third tournament of the year, taking full advantage of some of the missing big guns.

So that it’s for 2016, next month see’s our 2nd anniversary tournament taking place, and we are expecting big numbers.

Despite having only five players, all had fun and the sausages Giuseppe cooked went down rather well.