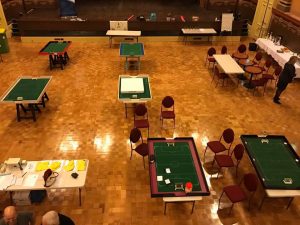 We set up early on the Friday afternoon and after a nice meal and catch up at a local pub after practice we headed to do the draw for the main Singles event for the following Saturday morning. We did a 3 player ,4 group format with each playing one game against the other with the top 2 progressing into the Quarter Finals and the remaining bottom players entering a WASPA barrage tournament to run alongside the knock out phases.

In the first game of Group 1 Benji Batten beat Hermann Kruse 3-1 to set the early pace in the group after a commanding display from the young Victorian, suddenly all memories of his 9hr flight delay where well and truly remedied. In Group 2 Ron Byrne faced up to Fabrizio Coco who along with Benji and Vikas was an outright favorite at the start and after a gallant effort the Italian proved to much defeating the Evertonian 9-0. In Group 3 Vikas opened up his account with a resounding 7-0 win against Ross Mcnulty to send out a real message of intent. Over in Group 4 Hugh Best and Chris Thorn played out a tense 0-0 draw to boost hopes for either player of a quarter final berth against group favorite Irwan. Into the second round of games and in Group 1 John Harty faced the daunting prospect of playing Benji Batten and he really did himself proud going down just 2-0 against such a quality player over the 30mins. In Group 2 Alan Kimber faced up against Fabrizio Coco and in another well matched game the mercurial Italian popped in 3 goals to firmly set up a quarter final showdown along with Benji in Group 1. In Group 3 Vikas again was banging the goals in as he beat Tony Credentino 5-0 to also join the others into the Quarters and over in Group 4 Irwan Iskander had a 1-0 victory over current newly appointed Perth President Hugh Best in a very tight and close match meaning the fate of who was joining Irwan came down to GD. In the final Group game in Group 1 Hermann Kruse took on John Harty and prevailed 3-0 to secure 2nd place alongside Benji Batten and in Group 2 the all Perth tie of Alan Kimber and Ron Byrne resulted in a 3-0 triumph to send a jubilant Kimber charging towards the Quarter Finals. In Group 3 it was do or die between Tony Credentino and Ross Mcnulty and after a see-saw game it was the Napoli loving Credentino that came out on top with a 3-1 win that catapulted him into the Quarter finals. The final game over in Group 4 pitted Irwan Iskander V Chris Thorn and Irwan powered his way to the Quarter finals with a 3-0 win that meant a joyous Hugh Best would be joining him after edging his Perth team mate on GD.

Into the Quarter Finals and Game 1 set up a classic encounter between Benji Batten and Tony Credentino with the game deadlocked at 2-2 Benji avoided the dreaded penalty shootout after scoring a dramatic Golden Goal 2 mins into extra time, the Victorian was ecstatic and as i watched on as a bit of fist pumping began for the young Australian. In the 2nd Quarter Final Alan Kimber took on Jurrong Centrals Irwan Iskander but could not find the form he needed and ultimately went crashing out 3-0 in another game where chances were taken mercilessly by Irwan and Kimbers usual long distance danger was kept at a premium by the Singaporian. In the 3rd Quarter Final Hugh Best took on Fabrizio Coco and another gallant effort was put in by the eccentric Perth boy but Fabrizio had too much class and went on to pop 4 unanswered goals to make the Semi finals 4-0. The Final Quarter Final game pitted the slick Vimas Chandiramani against the disciplined German Hermann Kruse and after another closely fought game it was Vikas that emerged victorious with a 2-0 win to join the other 3 Semi finalists.

The Semi Finals games were played at the same time and on table one it didnt take long for Benji batten to open his account against Irwan Iskander, and by half time be had opened up a 5-0 lead which had us all thinking it could well be his tournament, he added 2 second half goals in a 7-0 hammering but Irwan was delighted to have got so far in his statement after the game. In another classic encounter Fabrizio Coco faced off against Vikas Chandiramani, it was pulsating game but Fabrizio fashioned an early chance 5mins in with a finely worked move of patience, precision and power to put himself 1-0 up, Vikas played on creating 3 good chances but found the Italian defence to be rock solid on this occasion and after missing one final chance in the dying moments it was the Sydney residents day to join Benji Batten in the final. 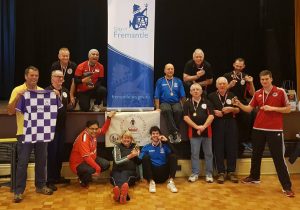 A Final of real quality began and it was very much tit for tat as both players exchanged a few half chances in an engaging game but Fabrizio took the lead with his usual calm demeanor and from then on defended brilliantly(as he had all tournament conceding 0 goals) as Batten tried desperately to break down his defence. Ultimately it was decided by the one goal and both players could go away with there heads held high as Subbuteo was the winner over the entire weekend as we laughed, cried, made great friends, ate lots of food and generally had a fantastic time together. thanks again to all the other 11 players involved in getting this event off the ground and turning it into reality, especially John Harty and his partner Bev bone who provided all the logistics as well as the world class venue we all flicked at. Thanks to Barbara Thorn who provided the grub for us all to demolish and once again well done Fabrizio Coco on taking out the inaugural Perth FISTF International Open, its an event we at Subbuteo Perth plan on keeping for as long as we can.