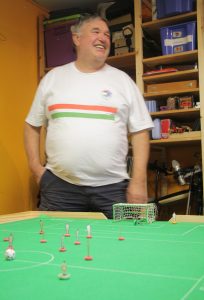 Steve Dettre and his 1966 flats

A field of 8 players, ranging from some of Australia’s most experienced table footballers to brand new players, gathered to contest the 2017 September Cup, the 13th edition of this annual tournament. The rules of The September Cup stipulate that only Subbuteo branded bases, goalkeepers, pitches and balls are to be used, so the event is always a fun one where players get to reminisce and pull out their old teams. This year, Steve Dettre went all out and used his original ‘flats’, purchased by his dad in 1966 and still going strong. Meanwhile Paul Magee used the Celtic team he’s had since 1969 – that’s over 100 years of Subbuteo history in those two teams, and players, alone! 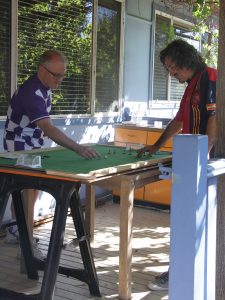 Eliot and Adrian soak in the spring afternoon.

Two groups were created for the initial stages. Adrian Elmer, using his hand painted España ’96 squad on 90s bases, faced Eliot Kennedy, using his 1970s heavyweights. Eliot took the lead but Adrian was able to peg back a goal to see the match end in a draw. Meanwhile, in the other group, Dave Sultana took the early initiative in the group of death with a 1-0 win over Paul Magee (a club league fixture between the two two days earlier had seen Paul get up by two goals to nil) while Tony Credentino scored a dramatic last minute equaliser in his match against Steve. In the second round of games, Eliot taught new player, Jason Potter, the ins and outs of the game – Jason using his billiards experience to quickly get on top of flicking angles. Costa Kamarados, playing with his early 80s lightweights, bought as part of a World Cup Edition box set at an Op Shop a year or so ago for just $2, went down 2-0 to Adrian, Paul and Tony played out a goalless stalemate and Dave continued his fine form with another 1-0 victory over Steve. In the third round of group games, Adrian saw off Jason 1-0 as Jason began to work out some solid tactical ploys, while Eliot put Costa to the sword. In the other group, Dave was already guaranteed of top spot but the other three all had a chance of progressing, depending on the results. Tony couldn’t get over Dave to force home his slight advantage, meaning Steve slipped past him with a slim victory over Paul. In a final catchup game, Costa finally found his touch, slotting three unanswered goals past Jason.

The Repechage Semi-Finals saw relatively comfortable wins for Tony and Paul, while the main Semi Finals were much tighter affairs. Adrian continued his unbeaten record over Dave, though the tight game could have gone either way. The other semi final, between, the two old sparring partners, Eliot and Steve, resulted in the tournament’s only shoot-out. Eliot put his shoot-out hoodoo to rest, finally taking the victory after seven shots each, to go to the Grand Final. 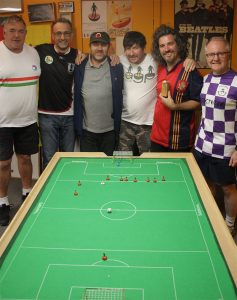 In the Repechage Grand Final, a goal from Tony finally managed to split he and Paul after their earlier goalless draw. In the Grand Final, Eliot and Adrian also faced each other for a second time, having met in the group stage. This time, Adrian scored the first goal towards the end of the second half. Eliot pressed hard for the equaliser in the second. The final few minutes saw him completely dominate possession, but an off-side figure that couldn’t be moved meant he was unable to enter the shooting area while Adrian kept his defence well organised. In the end, Adrian was able to hold on, in the process staging just the second successful title defence in the tournament’s long history.

An absolutely great afternoon played in the best spirits, with the different cloth and nylon pitches and the wild variety of curling and bobbling bases and figures adding an extra element of fun. See you all again next September!