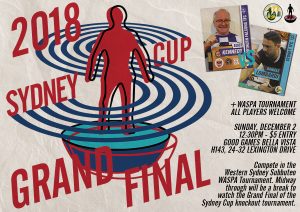 In February, 22 players began the long journey that was the inaugural Sydney Cup. The Sydney Cup was set up as a knockout tournament for all Sydney based players. Players were drawn randomly each round, no seeds, which meant that every round had some very juicy match ups, and the very real possibility of favourites making early exits and underdogs riding the luck of the draw to later rounds. Players were left to organise their own assigned matches, with games being played in games shops, community halls, school rooms, back sheds and lounge rooms across the year. The other feature of the Sydney Cup was the ‘double elimination’ system, meaning that when a player lost for the first time, instead of being eliminated, they dropped from the ‘red’ pool into the ‘blue’ pool. A second loss in the blue pool would see them eliminated, until we were left with just two players – Daniele Lombardi and Eliot Kennedy. And so we came to the 42nd and final game of the competition. The Grand Final was scheduled for Sunday, December 2 and was hosted by Good Games Bella Vista.

The two had played a warm up match each before facing off in the final. Eliot won the toss and elected to flick off first. A tense opening saw both players with equal possession. Then, midway through the half, Eliot made a calamitous defensive flick, knocking his own defenders out of the way and gifting Daniele an open shot at goal. However, as Daniele placed his hand to take his shot, his forearm landed on one of Eliot’s figures. The nerves from both players were clearly showing.

Eliot’s let-off spurred him into action, though, and, a few minutes later, he opened the scoring with shot on the run that was deftly tucked into the top corner as Daniele could only look on. Eliot relaxed with this and dominated possession for the rest of the half. His shooting proved to be a bit wayward, however and, without making too many clear cut chances, conspired to hit the woodwork and Daniele’s ‘keeper a number of times.

The players regathered their thoughts over the half time break and it was Daniele who came out the stronger. An early equaliser meant it was well and truly game on. Eliot responded with renewed pressure and, again, cursed the framework of the goals and Daniele’s ‘keeper as numerous shots failed to bother the scorer. Then, in a classic sucker punch, Daniele counter attacked and took the lead with 6 minutes left on the clock. In spite of his dominance, Eliot found himself behind where it mattered. Still he pressed, and most of the rest of the game found him in or near the shooting zone with Daniele defending stoutly. After a few more shots, even Daniele had to make the comment – “Every time you shoot you shoot straight at my goalkeeper”! With a little under two minutes on the clock, however, Eliot finally had his goal, tying the scores at 2-2, with a huge sigh of relief. And so the scores remained as the 30 minutes came to its conclusion.

The players repolished ready for the 10 minutes of golden goal extra time. Eliot lost the toss and so Daniele took the opening flick-off, in spite of a light hearted suggestion to give it to Eliot and so have the opening possession for the (non-existent) second half! Daniele wisely turned the offer down and elected to take the flick-off. It turned out to be his best decision of the afternoon. After the flick-off, Eliot didn’t even get to touch the ball. Daniele manoeuvred his way forward and a slightly overhit defensive flick from Eliot gave Daniele the chance he needed, burying his shot emphatically into the top corner to finish what turned out to be a rather anti-climactic extra time period after the tense to and fro of regular time. Eliot was left to rue the countless shots he had which were saved or hit the woodwork, while Daniele’s accurate finishing from the handful of shots he created during the game proved to be the decisive factor. 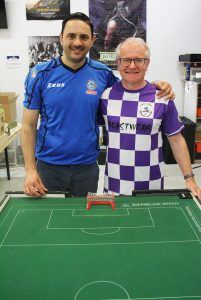 It was a great grand final played in excellent spirits, with both players honouring some very tight referee calls without comment, and focusing on playing high quality table football. Many congratulations to both players. It was a fitting finale to a year long saga which, we hope, will be the first of many to come for the Sydney Cup.

For the full results of all the 2018 Sydney Cup matches, click here.