With Rob deciding that he couldn’t turn up for the season closer and refusing all offers of a rescheduled match, it was left to one final match between Eliot and Steve Diasinos to decide whether Eliot could take the title. Eliot started as a clear favourite and quickly asserted his authority. Steve, however, was going to be anything but compliant in Eliot’s quest for glory. Steve’s precision with his defensive flicking was excellent and Eliot was being thwarted at every turn. Eliot pulled the ball left to right and back again in an attempt to draw Steve’s defenses out of place but Steve maintained his organisation. It came down to a single missed blocking flick to finally allow Eliot the space for an open shot on goal. With the extra time and space afforded by the free shot, Eliot made no mistake, careful not to overhit his shot from close range. Far from knocking the wind out of Steve, however, this spurred him on and Eliot’s ‘keeper was called on to make a very fine save to hold the lead at half time. 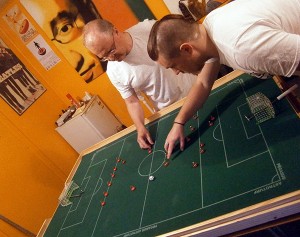 Steve on the counter-attack after thwarting one of Eliots attacks.

The second half was equally as intriguing. Eliot continued to press but Steve was frustrating him. Eliot was forced to try and up the tempo when moving forward but this lead to some missed flicks, giving Steve more chances to push for an equaliser. Getting into the scoring area a few times, Steve’s precise touch in defense left him in the front quarter, easing Eliot’s nervousness. Eliot finally got the space he needed as Steve pressed for the equaliser and found the back of the net, giving him room to breathe with a few minutes left. And so the score remained, enough for Eliot to take the inaugural Subbuteo Parramatta league title, though he was made to work hard every second for the honour.

So the season draws to a close with the early favourites coming out on top. The league has, however, also been partly instrumental in inspiring the reinauguration of their old club, the Northern Falcons, and the Subbuteo Parramatta players now look forward to some official inter-club action in the new year. The newer Subbuteo Parramatta players have all improved greatly with regular action and a real club spirit is beginning to form. Many thanks to all who have taken part.