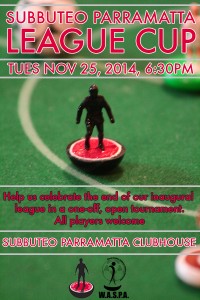 Held to commemorate the end of Subbuteo Parramatta’s first ever league, the League Cup was a one off WASPA Promotional tournament which was opened up for any players who could make it, whether they’d played in the league or not. A few of the league players were unable to play due to work commitments, but a couple of new players were able to come along in their place.

A league was played, though time allowed only 4 of the 5 possible rounds to be played. By the end of the 4 rounds, however, there was a clear cut and deserved winner which the 5th round would not have altered.

The opening fixtures saw the two Italians draw each other. After a couple of tournaments, Daniele is beginning to find his feet again after 20 years off playing while new boy Fabrizio was a completely unknown quantity. It didn’t take long for Fabrizio to lay down the ganutlet, taking an early 2 goal lead with his typically Italian faced paced movement and precise defensive flicking. Once Daniele settled into the groove, however, he was able to even the play up, and eventually pulled a goal back as well, though Fabrizio took out the honours. In the other game, Adrian dominated possession but a combination of poor finishing and good defending meant that Gordy held out until the final minute of play, when Adrian finally managed a shot that Gordy’s ‘keeper was unable to keep out. 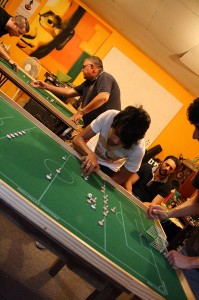 Gordy attacks Fabrizio in the foreground while the two Steve’s battle it out in midfield on Table One.

The two Steve’s renewed their growing rivalry and, again, the game was a classic. Dettre had the run of play during the first half of the game, though some great ‘keeping from Diasinos, and the woodwork, kept the scores level. Finally, Diasinos’ resolve was broken, however, and Dettre took a deserved lead. This seemed to spark Diasinos into action and he began to control more possession and begin creating his own chances. He soon had an equaliser from a well taken shot from an almost impossible angle to put Dettre on notice. Then, as the final seconds ticked down, a Diasinos corner led to a half chance within a few flicks. Diasinos then proceeded to bury his shot and take his first ever victory over Dettre with virtually the last action of the game. On Table 2, Fabrizio was putting Gordy to the sword, his swift play seeing him rack up 4 unanswered goals. 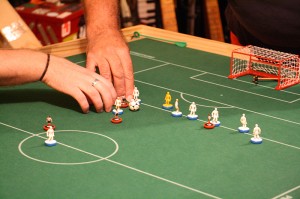 Some Steve on Steve action.

Diasinos next lined up against Daniele while Dettre took on Adrian. Daniele and Diasinos cancelled each other out, playing out a goalless draw which saw lots of excitement but no scoreboard action. Meanwhile, Dettre and Adrian looked headed in the same direction, even though Dettre was forcing a number of saves from Adrian’s ‘keeper. With 8 seconds left on the clock, though, Dettre got his breakthrough. With Adrian focusing on where Dettre might pass the ball, Dettre surprised him with a shot from an acute angle and Adrian’s ‘keeper could only watch it fly into the back of the net.

The next two games saw two more goalless draws as Daniele and Gordy played out one on one table and Fabrizio and Adrian did the same on the other. Fabrizio’s defensive flicking, in particular, was impeccible, closing down Adrian’s angles time after time and, while he couldn’t break down Adrian’s defenses, his fast movement caused great problems in attack as well creating some good chances.

Diasinos then took on Adrian on Table One. The game was best summed up in Diasinos’ immortal words – “It was as unelegant as 7 dancing elephants!” A sloppy game saw both players persistently go for half chances, miss, then leave themselves exposed. Unfortunately, neither was particularly deadly in building clear cut chances, or even putting the ball out for a goal-kick. The Subbuteo purists would have been appalled as they each seemed to attempt to outdo each other in their poor positional and build up play. Yet again, it came to the final minute where, at last, Diasinos managed a clear shot on goal which he snuck past Adrian’s ‘keeper. Meanwhile, Dettre found the Midas’ Touch on Table Two, with almost every shot sliding past Gordy’s ‘keeper to claim the evening’s biggest win of 5-0.

With finishing time approaching, 4 players were left to complete their fourth games. 1st and 2nd on the points table (separated only by goal difference), Fabrizio and Diasinos were drawn to play head-to-head, while Dettre, sitting just a point behind, could still take the tournament if he could beat Daniele and hope for a draw in the other match. Dettre honoured his end of the bargain and, though made to work for it, especially with Daniele’s ability to hit the woodwork, saw Daniele off with a 2-0 victory. Another epic struggle was brewing on Table One, though. Diasinos took a fairly early lead which seemed to calm his nerves significantly, as well as force Fabrizio to chase the game. And chase he did. On three occassions his quick flicking on the run, saw him through Diasinos’ defense only for Diasinos’ ‘keeper to somehow be in the right place. A couple more shots off the uprights had Diasino thinking it must be his night. Not that Fabrizio had it all his way. As he pushed for the equaliser, Diasinos took advantage of Fabrizio’s lightened defense and had some more chances of his own. The game became a real arm wrestle as both players gave everything but, in the end, Diasinos held out to end the night undefeated and take his first title. 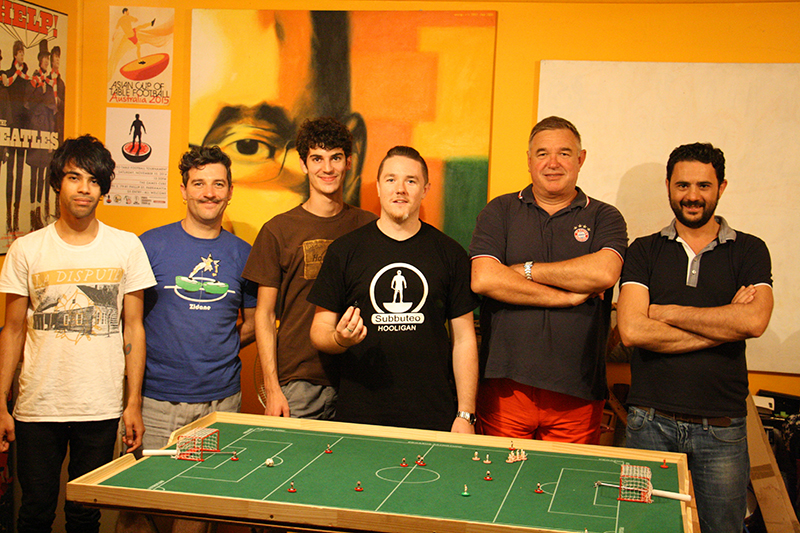