Australia’s table football players have united with the Dylan Tombides Foundation to raise awareness of testicular cancer in the lead up to the 2019 Australian Grand Prix of Table Football this month.

The cooperation is the result of Australian Table Football Association President Adrian Connolly’s personal brush with testicular cancer after being diagnosed just before Christmas. 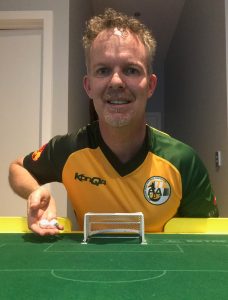 Like many men, Adrian says he knew very little about testicular cancer.

“I was shocked to find out how common testicular cancer is for young men and that the rate has been rising. The form of testicular cancer is typically found in men in their 20s and 30s so all males from the moment they become a young adult should become informed, be aware of their body, and most importantly take action if you think something may not be right.”

The Australian Table Football community is uniting behind Adrian and have joined forces with DT38 Australia, a charity raising awareness of testicular cancer to save lives that was set up in memory of Dylan Tombides. Dylan was an Australian International and West Ham United professional football player who passed away aged 20 in April 2014 after a 3 year battle with testicular cancer.

“In the weeks before Christmas I found a lump. Before I knew it I was having scans and being referred to a specialist by my GP.” Adrian said. “I then had further scans and surgery to remove a tumour which was later confirmed to have been testicular cancer.”

“Breaking the news to my children on Christmas Eve was particularly difficult.” Adrian went on to say. “The good news is that the surgeon believes that the surgery was curative.”

“The initial scan to find out if you have a tumour is non-invasive, a basic ultrasound which for me was also at no cost as it was bulk billed. There really is no excuse to get anything checked out.”

The draw for the Australian Grand Prix tournament will be held on Friday 18th January and will feature special guest representatives of DT38 Australia.

The tournament will take place 19-20th January.  World no.25 Antonio Carabillo will be travelling from Hong Kong to take on the best Table Football players from across Australia.

DT38 Australia is part of the DT38 Foundation which was set up in memory of Dylan James Tombides. Dylan was an Australian International and West Ham United professional football player who passed away aged 20 in April 2014 after a 3 year battle with testicular cancer. The West Ham Family thought so highly of Dylan that they retired his number 38 and made DT38 one of their principal charities.  The charity has been formed as a result of Dylan being misdiagnosed. Their vision is to change the way testicular cancer is diagnosed by implementing best practice diagnostic guidelines for patients who present with testicular symptoms.  DT38 also aim to arm future generations of young men with the necessary knowledge about testicular cancer that will enable them to be confident when taking health matters into their own hands.

DT38’s mission is to raise awareness and change the stigma associated with men’s health issues with a focus on testicular cancer. They aim to do this through providing educational programs and opportunities for the youth of our community, to help shape a generation of children who are self- aware about their health and wellbeing.

The Australian Table Football Association (ATFA) governs Sports Table Football which is based on the Subbuteo table top game that reached its peak in the 90s before making a retro comeback in recent years. Clubs are located in each capital city plus major regional centres. ATFA is a member of the world governing body for the sport, the Federation of International Sports Table Football (FISTF).

The Australian Grand Prix of Table Football will be held 18-20 January 2019 at the Margaret Whitlam Recreation Centre in iconic Bondi, NSW.