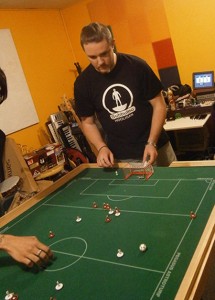 The trash talk leading up to tonight’s games started days ago and continued right on through all three games. Steve had made some bold claims about pumping Gordy and so needed to back that up with actions. Gordy, however, had the opening couple of half chances as Steve began shakily. By 6 minutes in, though, Steve took the lead that saved his possible blushes and followed it up quickly with a second. Gordy was shell shocked in the latter stages of the half and Steve managed to take a 3 goal cushion to the break to go with his ritual insults. The second half saw Gordy come out fighting though, and was a much more even affair. Some half chances either way didn’t amount to anything until the final minute, when Steve finally broke Gordy’s resolve. Steve’s touch has improved significantly over the last couple of months but he has often been let down at the pointy end but, tonight, a fourth meant that his goal difference for the tournament is back to evens.

The night’s most open game could have gone either way with both players missing some golden opportunities. The same rookie error repeated twice by Rob gave Gordy chances on open goal – the first stopping agonisingly close while the second was miscued horribly. See the video footage for the damning details. At the other end, a couple of limp wristed saves from Gordy, and some poor finishing, kept Rob goalless. While both players talked a big game, in the end, they were both reasonably content to come away with a point each, the first of the league for Rob.
Click for Open Miss #1 video
Click For Open Miss #2 video 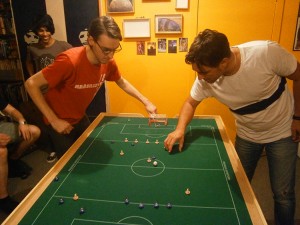 Having had a good half an hour warm up, Rob’s next opponent was Raffaele who was looking to further climb the table. Raffaele dominated the early play but Rob’s defense was solid and no clear cut chances were created until past the midway point of the half. Raffaele then dug a burrow through the centre of Rob’s defense and a delicate finish saw him take the lead that most watching had expected. What wasn’t expected was Rob’s spirited fightback. This was rewarded with a well worked goal seconds from half time, leaving Raffaele somewhat shell-shocked. This was Rob’s first goal of the tournament and his celebration left his seeing glasses buried in the dust behind a cupboard in the room. As the second half began, it became apparent that Raffaele was feeling the pinch as he began blaming substandard Italian Subbuteo figures for his poor flicking. As he pushed for a winner, Rob was finding large holes to exploit on the counter and had some half chances to really press his claims. With around five minutes to go, a noticable change came over Raffaele as he began to play a more deliberate, careful passing game and this was rewarded with a second goal after Rob missed a regulation defensive flick to leave Raffaele’s attacker one on one with the ‘keeper. Rob had already made a couple of fine saves but Raffaele was not to be denied on this occasion. And while Rob continued to foray forward and keep Raffaele sweating, Raffaele held on for the victory that took him past Paul on the ladder.

With two games left to play, all that is left to be decided is who will win the league! Eliot would still be feeling confident based on his form over the tournament, but Rob and Steve’s recent improvements as they have played more games mean that neither will lay down and let Eliot walk over them. For the other players who have now completed their fixtures, the final two games will see the dust settle but the table has taken a more complete looking form.