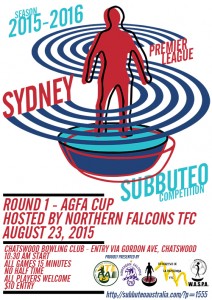 The first ever AGFA Cup took place in 1977, where a very young Steve Dettre beat an even younger Jonny Ball on shots in the Grand Final. 10 further AGFA Cups were battled out in the ensuing two decades before the competition went on an indefinite hiatus. But now, it’s back!!

A fast and furious competition, the AGFA Cup runs on the premise of every game only lasting 15 minutes. No half time breaks, no changing ends, barely time to think. And, while it stands alone as its own tournament, this year’s AGFA Cup will also have the honour of being the first stop on the brand new Sydney Premier League circuit (more details on that here).

Entry is open to all players with any level of experience. Please fill your details in the form below and join in.