As the Sydney Subbuteo scene slowly awakes from its winter hibernation, four players made their way to Good Games Chatswood for an evening of friendly flicking. The regular Northern Falcons evening was just what the doctor ordered as players seek to get back into some flicking rhythm with the Sydney Spring League beckoning. 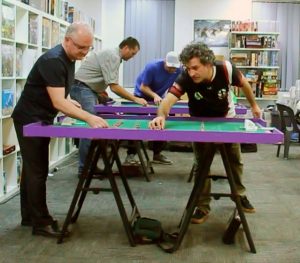 Adrian Elmer and Mat Barrie from Subbuteo Parramatta joined Hermann Kruse and Eliot Kennedy for a round robin competition of short (20 minute) games. Eliot and Mat kicked off, with Eliot easing to a 1 – 0 win, unable to turn possession into goals thanks to some good defending and great keeping by Mat, who had several opportunities to grab an equaliser on the break. On the other table, Adrian struck some good form to dispatch Hermann 3 – 0 in the most decisive score of the evening. Adrian and Eliot (pictured below) then played a tight match, with Eliot again tending to dominate possession but only able to convert once. Adrian played confidently and had his chances too and could easily have evened things up. Meanwhile, Mat and Hermann battled to a 1 – 1 draw. In the final round, Hermann very nearly kept Eliot out with some great keeping, withstanding something of a bombardment to go down 1 – 0, and Arian and Mat played a typically tight match, with Adrian grabbing the honours 1 – 0.

In the end, Eliot just came out on top with three narrow wins, with Adrian second on six points and Mat and Hermann both on one point but Mat pipping Hermann on goal difference. But the main result of the night was the chance to get some much needed match practice before the Spring League and the Australia Open next month in Melbourne.