As far as can be seen from the current records available to us, the 2017 Sydney International Open was the second largest one-off Subbuteo tournament ever held in Australia, its 43 competitors falling just a couple short of the legendary 1988 Sydney Open. With two days of action and seven different competitions taking place, there was no shortage of competitive fun for all involved. A strong contingent from Melbourne made their way up, with others coming from Berry, Brisbane and Singapore.

The room in full swing – Women’s tournament in the foreground, Teams to the back and Junior WASPA on the left.

Saturday saw two FISTF tournaments take place, the Women’s tournament and the club Team’s Tournament. In the former, the Elmer sisters played out a goalless stalemate in their opening round game before Charlotte Wright from Melbourne lost one game to Æowyn and won the other against Imojjen. This was enough to set up a rematch between her and Æowyn in the final. However, Æowyn’s experience came through and she was able to take her first ever FISTF title with a 1-0 win in the grand final.

The Teams was a much more complex proposition. Top seeds, the Northern Falcons, were drawn against Sydney East’s Hipfingerz and a Barbarians team – players from a variety of clubs without their own team for the tournament who banded together. In the other group, Subbuteo Parramatta drew Sydney TFC (largely made of players who had helped earn Subbuteo Parramatta their 2nd seeding!) and the traveling Western Flickers from Melbourne. The group stages went according to the form guide, with the Falcons gliding past their opponents and Sydney TFC making similarly light work of Group Two. The Barbarians managed to edge Hipfingerz in Group One, but the Hipfingerz went through by virtue of the fact that, as an unrecognised FISTF outfit, the Barbarians were not permitted past the group stages. Which left the match between Subbuteo Parramatta and the Western Flickers as the main point of interest for the group stages. While Benny Ng snagged one point for the team from Melbourne, the other three games went the way of the hosts, giving them a berth against the Falcons in the semis.

Sydney TFC continued their whitewash record with another four wins over their Hipfingerz opponents in one of the semi finals. Subbuteo Parramatta went into their semi knowing they had a glimmer of hope if they could all perform at their best. However, only Paul Magee could follow through on the promise, the Falcons putting Subbuteo Parramatta to the sword, exemplified by a 3-1 victory by Adrian Grunbach over ex-team mate Richard Wilson in their first competitive match in 20 years, and a 6-0 master class by Steve Dettre against the hapless Adrian Elmer. 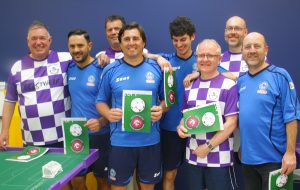 The final turned out to be the most evenly balanced in Australian Subbuteo history, going down as a final for the ages. With 5 minutes of the contest remaining, the Falcons had a 2-1 lead and one hand on the winners’ certificates. However, in a pulsating final few minutes, both Tony Credentino and Raffaele Lombard were able to put equalisers past their respective opponents, Hermann Kruse and Eliot Kennedy, to leave three of the four games as draws when the final whistle blew. This meant that Fabrizio Coco’s sole victory, against Adrian Grunbach, was enough to give Sydney TFC a 1-0 victory and the title! 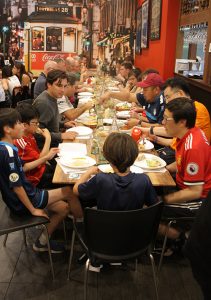 While all this was taking place, the collected juniors and eliminated opens players all played respective WASPA tournaments, with Oliver Ollnow coming out on top in the Juniors and Benji Batten claiming his first title in some time in the Opens. The excellent day’s play concluded with a live broadcast draw for Sunday’s two FISTF tournaments, and then two thirds of the players heading out for a dinner together at Frango’s, a great time of catching up with old friends and establishing new friendships.

Sunday morning saw an eager crowd gathering early outside our venue – Good Games Bella Vista – for a bright and early beginning to the individual Opens and Juniors FISTF tournaments. In the Juniors, twelve competitors were split into 3 groups for the early rounds. These went to form with seeded players, Jonty Brener, Oliver Ollnow and Daniel Sirmai each topping their groups. Charlotte Wright backed up her performance from Saturday’s Women’s tournament with a solid showing, going down 1-0 to new player Thorben Pfister in the barrage. In the semi’s, Jonty put two past Thorben, while Daniel Sirmai and Oliver Ollnow played out a thrilling 2-2 draw, Oliver finally taking the tie with an extra time winner. So, the final pitted the two rivals from Saturday’s Junior WASPA final against each other yet again. This time, Jonty put up a far sterner fight and neither player could wrestle an advantage during either normal or extra time. So, as the players from the Opens tournament gathered around, the two went to a shootout. In the end, Jonty held his nerve to take an extremely close fought 3-2 shots victory and claim his second FISTF tournament win.

The Opens saw a large field split into 7 groups. Here, again, the seeded players all managed to take top spot in their groups though not without the occasional scare. Recently returning to the game, Stephen Wright from Western Flickers sent a few small shockwaves around the venue when he accounted for Steve Dettre in their group clash, the battle of the Lombardi brothers went down to the wire before Raffaele prevailed, and Adrian Elmer was almost able to eke out a draw against a nervous Benny Ng before Benny’s experience held out.

The barrage round is where the dust really settled, with each of the top seven seeds making their way to the quarter-finals, joined by the founder of Australia’s newest club, Northern Phoenix’s Christos Garagounis. The extremely tight field meant that predictions from here on were impossible. A rollercoaster game saw Benny Ng come from behind to defeat his old nemesis, Benji Batten; Raffaele Lombardi narrowly accounted for Eliot Kennedy in the latest chapter of their ongoing rivalry, needing an extra time winner; Fabrizio Coco began to stamp his authority on the tournament with a 4-0 win over Steve Dettre, while Bernard Lim was getting into the swing with a 2-0 win over Christos. In the semis, Bernard made a big statement with a clear 3-1 victory over Raffaele, while Fabrizio edged Benny 2-1. Which set up a grand final showdown between the tournament’s top two seeded players. 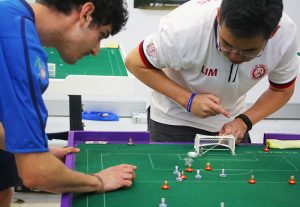 The grand final, however, didn’t start out as the tight tussle most were expecting. In the 9th minute, Bernard scored his third unanswered goal, his complete domination meaning the game seemed over almost before it had begun. Collecting himself, however, Fabrizio managed to claw a goal back just before half time to give himself hope for the second half. After a five minute break the players came back out and things changed dramatically. Bernard struggled to get a touch and, when he did, could not mount any significant forays into Fabrizio’s territory. The entire half was completely dominated by Fabrizio who forced corner after corner from Bernard’s last line of staunch defence. Midway through the half, he finally broke and Fabrizio was within a single goal of drawing level. The same pattern continued, with Fabrizio battering Bernard and Bernard holding on tight – with his excellent defensive flicks and, when needed, the odd great save from his ‘keeper. In the end, the opening three minutes, where Bernard scored two goals, proved to be the telling segment of the game. Fabrizio could simply not get through for an equaliser and Bernard held on to claim victory, and the title, in a titanic grand final struggle, 3-2. 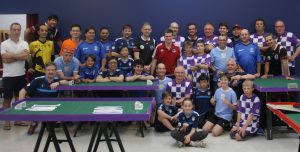 Most of the weekend’s competitiors.

Four tightly contested grand finals in the weekend’s FISTF tournaments were testament to the success of the tournament, where every player played with determination, balanced by an overwhelming spirit of fair play across the weekend. A huge thanks to all who turned out to make this one of the most successful tournaments in our game’s history in Australia, traveling from far and wide to be here, and an extra thanks to our host – Nathan at Good Games Bella Vista – for supplying us with an excellent venue and all the support he gave in setting up, running and packing down the tournament. With plans already afoot to make the next tournament at the venue even better, the only way is up for our great game.