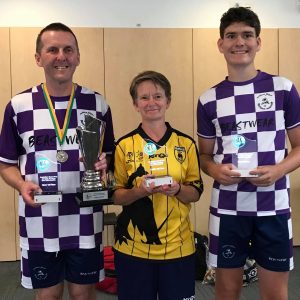 January 18-20th the 2019 Australian Grand Prix of Table Football was held in iconic Bondi, Sydney.  It was one of the largest events ever held in Asia with 38 entries in the Open category, 12 juniors, 6 women, and 6 club teams.

The festivities began on Friday 18th January with the dinner and draw, supported by DT38 Australia guest speaker Donna Giuffre to raise awareness for testicular cancer in what promises to be an ongoing relationship between DT38 and the Australian Table Football Association (ATFA).

As always seems to be the case there was a “group of death” in each individual category:

In the junior event, the first upset occurred when one of the favourites, Benjamin Ng, was an early casualty from the group of death.  Group 3 finished level, requiring a penalty shootout between Jonty Brener and Daniel Sirmai to separate the two at the top of the table, with Jonty prevailing.

In the Barrage, Northern Falcons’ Jonty Brener and Torben Pfister overcame Charlotte Wright and Daniel Sirmai to join Nicholas Carabillo and Gabriel Lombard in the semi-finals.

Both semi-finals were tight affairs, with Torben overcoming Nicholas 2-1 on shots after a pulsating 2-2 draw; whilst Jonty defeated Gabriel 1-0.

This made it an all-Northern Falcons final, demonstrating all the good work Hermann Kruse has done for the juniors of the club in recent years.  Hermann will be sorely missed when he departs Australia in a few months’ time.  In what would become the theme of the day, the finalists could not be separated in normal time.  Jonty scored the important golden goal in extra time to take the honours 2-1. 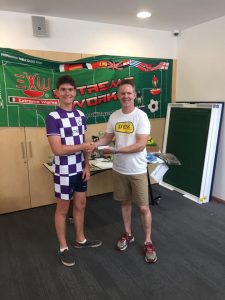 In the women’s event, Juliette took out Group 1 on goal difference, while Charlotte Wright topped Group 2.  In the semi finals, Beth defeated Charlotte 1-0, while it took penalties to break the deadlock in the other semi-final with Juliette ultimately prevailing to set up a repeat of the final of the Melbourne IO in October 2018.

The final was a typically tight contest between Beth and Juliette.  This time Beth held her nerve in the shootout of a major final to take the Australia Grand Prix title 1-0 on shots. the first FISTF title for her club Northern Phoenix TFC. 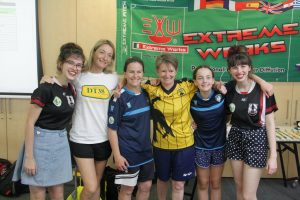 In Group 1 the games went largely as expected, though Adrian Connolly pushed top seed and 2018 Asian Cup runner up from Hong Kong Antonio Carabillo all the way in a 2-1 loss to make Antonio earn his top spot.  This would be the last goal the Antonio would concede until the final.

Group 2 was the “group of death”.  After a narrow 1-0 win by Raffaele Lombard over Paul Mercer, Adrian Elmer knew he was up against it.   Raffaele then won 2-0 over Adrian with a very late second goal.  Adrian needed to defeat Paul in the final game and did so 2-0 to deservedly qualify from the group.   Unfortunately for Paul, his game may have started to suffer from the distraction of the great work he had done with the fixturing and driving the schedule for the event. Many thanks go to Paul for his great work over the weekend and leading up to it.

Group 3 saw Eliot Kennedy top the group with an impressive 13 goals without reply.  Canberra’s only entrant Nicholas Brill progressed to the barrage in second place.

Group 4 was another tough group.  4th seed Benny Ng had drawn tournament dark horse Daniele Lombardi, fresh from his win in the inaugural Sydney Cup.  The clash of the two highest ranked players was one of the games of the tournament, finishing in an incredible 3-3 draw.  The group was then decided by goal difference, with Benny prevailing, to send Daniele into the barrage.

Group 5 saw Australian World Cup representative Fabrizio Coco top the group impressively with 14 goals from his 3 games.  Jonny Ball did well to take second place by defeating both Neil Brenner and Billy Wright, and also putting a goal past Fabrizio – one of the few players to do so over the weekend.

In Group 6, there was the only seeded player eliminate at this stage of the tournament.  Australian Veterans category World Cup representative Hugh Best found the going tough, finishing goalless on the bottom of the group.  Brisbane’s Giuseppe Tardiotta looked full of confidence, taking out the group comfortably with three wins and 13 goals.  Junior champion Jonty Brenner progressed with him in second place.

Group 7 had its first casualty of the event with Paul Magee who had to withdraw at the last minute due to the effects heat stroke from the scorching hot Sydney weather the previous day.  Thankfully he was in a group of 4 so as to not throw the draw into turmoil.

This presented a great opportunity for Kevin Grant to progress from his group again at a FISTF event and took this with both hands by comfortably defeating Louis Dettre.  Australian veterans category World Cup representative Rob Green, who had travelled all the way from Stockholm, Sweden to compete, topped the group without conceding to set up an exciting barrage clash with the winner of group 10 – Luke Radziminski.

Group 8 was a tight group from which the two Northern Falcons prevailed, Steve Dettre taking the group on goal difference from Adrian Grunbach thanks largely to his merciless 4-0 win over debutante Victoria Hampshire.

Group 9 went down to the wire.  Both Nicholas Carabillo and Tony Madiona went undefeated.  At half time of the final games, it was Tony and Geoff Sirmai who were set to progress.  However, a winner by Nicholas in the second half against Geoff saw him top the group, and sent Geoff out of the tournament despite just one narrow loss from his three group games.

Luke Radziminski started off Group 10 in ominous fashion with a 5-0 over Junior finalist Torben Pfister, and then an impressive 4-0 over Tony Credentino who rarely concedes many goals.  Tony, as expected, progressed in second place behind Luke in second place to enter the barrage.

The barrages saw comfortable victories for Nicholas Brill, Daniele Lombardi, and Tony Credentino over Kevin Grant, Adrian Grunbach, and Jonty Brenner, respectively.  The 4th barrage game was much tighter.  Tony Madiona was 1-0 up over Jonny Ball in the last minute, before giving away possession in attack.  Jonny capitalized and scored an equalizer with 10 seconds to go.  Jonny then took the momentum into extra time, scoring the winner to progress.

In the round of 16, top seed Antonio Carabillo needed extra time to break the deadlock against Tony Credentino and take out a narrow 1-0 win.  Steve Dettre and Fabrizio Coco both won 3-0, against Nicholas Carabillo and Adrian Elmer respectively.  Raffaele Lombard easily defeated Jonny Ball 4-0 and Benny Ng had a comfortable 5-1 win over Canberra’s Nicholas Brill.  Benny’s club mate Adrian Connolly had a shock 2-1 win over Guiseppe to see them both progress to the quarter finals.  In what many saw as a potential final prior to the draw, Rob Green overcame Luke Radziminski 3-2, the only time Rob conceded multiple goals in a game over the entire weekend.

The quarter finals saw 3 Northern Falcons in four of the games.  Steve Dettre was the only casualty, going down 2-0 to Antonio Carabillo.  Rob Green narrowly defeated Raffaele Lombard 1-0 after Raffaele failed to capitalize on long periods of pressure.  Eliot Kennedy repeated his 3-1 scoreline from the Melbouren IO 2018 semi-final over Adrian Connolly, although this clash was much tighter than their previous encounter.  Adrian could consider himself unlucky to be 2-1 down at half time, with time running out at the end of the first half following an accidental handball by Eliot just outside the box from a shot by Adrian.  In the remaining quarter final Fabrizio Coco needed to come from behind to defeat Benny Ng with a golden goal in extra time to see the last of the Victorian contingent eliminated.

The semi-final draw saw Northern Falcons stalwarts of the game Rob Green and Eliot Kennedy clash. Rob Green’s defiant defence again proved the difference, with Rob taking out his second consecutive 1-0.  The other game saw equally strong defensive play.  After a goalless game between Fabrizio Coco and Antonio Carabillo, Antonio prevailed 1-0 in extra time to see the top seed progress into the final.

In a final fitting of an international quality event, the two players who had travelled the furthest to compete were pitted against each other – Hong Kong’s Antonio Carabillo and Australia’s Stockholm resident Rob Green.  Rob looked in control for much of the game but only held a narrow 1-0 lead.  In the dying moments, with possession at a corner, Rob chose to attack rather than maintain possession.  With possession conceded, and seconds remaining, this gave Antonio one last chance.  With an incredible long pass and shot on the run he equalized with the last flick of normal time to raise the roof on the venue!  But Rob Green regained his composure in extra time and avoided too much regret for this error by scoring the important golden goal and take the Australian Grand Prix 2019 Open title 2-1. 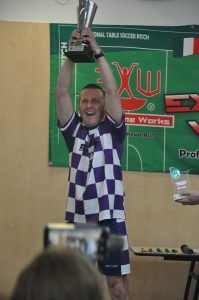 Six teams entered the competition, Sydney TFC, Northern Pheonix TFC, two from Northern Falcons TFC and two from Western Flickers TFC.  To give other players more games, a team of “Barbarians” was also entered in to Group 2, but were not eligible to progress from the Group stage of this FISTF tournament.

In the semi finals, the two seeds progressed.  Northern Falcons easily defeated their B team.  Whilst in the other semi, Sydney TFC was forced to throw on their “super sub” Raffaele Lombard to ensure they took out victory 2-1.  Again credit to Western Flickers’ improvement to be able to push this club much harder than they were able to at the Asian Cup in 2018.

The final was a local derby between Sydney TFC and Northern Falcons.  In a fitting finale, there were 2 wins apiece, meaning the result was determined by total goals scored, with Sydney TFC taking this out 5-4. 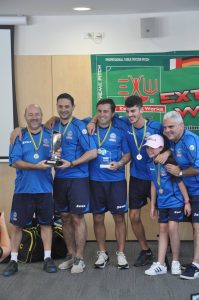 In closing, a special thanks to all those involved in organizing and running the tournament, and the many players that travelled far and wide from all corners of Australia, and the world, to compete, referee, and generally have a great time at a fantastic event in a superb location.