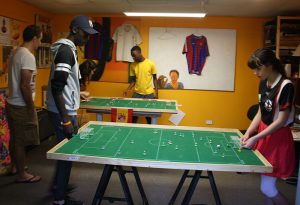 Play gets underway – Imojjen v Othniel at the back, Andrew v Æowyn at the front.

School holidays can mean only one thing – another Junior WASPA tournament at Subbuteo Parramatta. 4 players were free this holiday, two of whom were competing in their first WASPA tournament. Sisters, Imojjen and Æowyn Elmer, were joined by new club members, Othniel Antwi and Andrew Kuany. The boys had both played in school competitions over the last 2 years, so were far from new to the game, but this was their first chance to take their enthusiasm outside the school gates.

A simple group format, with the top two progressing to a final, was decided. Andrew started confidently, having recently won his school’s Subbuteo tournament, but was soon brought back to earth when Æowyn went ahead and then held on in their opening encounter. Meanwhile, Imojjen and Othniel played a tight tussle. Imojjen’s shooting fingers were nowhere to be found, however, and Othniel found the back of the net to take the game 1-0. The second round saw Imojjen lose again, by the same score, to Andrew, while Æowyn and Othniel, each looking to head to the top of the table, played out a stalemate in their encounter. The mind games then began – Imojjen couldn’t progress to the final, but her result against Æowyn would have a large bearing on who would. Andrew knew a win over Othniel would see him leapfrog his opponent, while a draw might be enough if Imojjen could beat Æowyn. And so the trash talk began in earnest! Imojjen and Æowyn battled out a scoreless draw, their skill levels dropping significantly as they, by their own description, both played their worst game ever. The result, however, meant Æowyn was in to the final, regardless of the other result. Othniel took a lead over Andrew to the half time break, as the two attempted to out-talk each other more than out-play each other. An equaliser early in the second half meant that Andrew could make the final with one more goal. In a tense finish, though, it was Othniel who kept his nerve and scored a winner with couple of minutes to go. 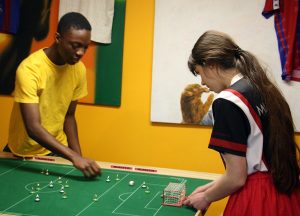 Othniel on the attack against Æowyn in the Grand-Final

In the 3rd and 4th play-off, Imojjen had a number of shots on goal but just couldn’t get her accuracy to work on the day, while Andrew was far more clinical with his chances, taking the game 2-0. meanwhile, in the Grand Final, Æowyn’s accurate flicking was proving too much for Othniel. She took a deserved 1-0 lead into the half time break and was looking confident. Othniel managed to hang on, though and started getting some shots of his own, though Æowyn’s goalkeeping was proving to be another huge hurdle. With under a minute left on the clock, Othniel broke into the scoring area and finally found a way past Æowyn’s ‘keeper to send the game to extra time. The deadlock couldn’t be broken, though, so the two went to a shootout. Othniel’s first shot was a shocker, dribbling harmlessly across the area, Æowyn’s blazed over the top with hers and Othniel buried his second to take the advantage. Now it was Æowyn’s turn to lose her shooting touch and, though she did keep out Othniel’s next two with some good goalkeeping, she was nervous with her shooting and failed to trouble the scorer. With his final shot, Othniel took an unassailable lead to take the title. 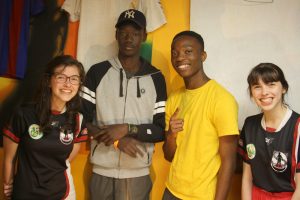 A great day of friendly rivalries and some hilarious on-field commentary and light-hearted sledging. Canberra TFC’s Yago Dzelalija was also able to come up for the day and reintroduce himself to the game, assisting with refereeing and getting some extended friendly flicks in himself. A great day was had by all.