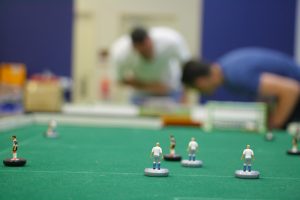 Subbuteo Parramatta’s February WASPA tournament saw 4 of the club’s stalwarts head to the clubhouse at Bella Vista to battle out a very tight competition. Richard Wilson immediately put himself in the bad books by loudly declaring that this would be his first tournament officially as an Illawarra Table Football Club player – he had abandoned the club that had given him so much in getting him back into the game. On top of this, he was also getting his board, long stored at the clubhouse, and taking it home to Kiama at the end of the night. Not a good way to get onside with his opponents.

The first round of games saw Mat Barrie completely dominate Dave Sultana only to find that the woodwork was harder to beat than Dave’s ‘keeper. In the end, the woodwork proved to be the winner, a 0-0 scoreline ensuing. On the Extreme pitch, Adrian Elmer was in unfamiliar territory, dominating his opponent, Richard, instead of spending much of the game defending, as is his usual game plan. A number of half chances were easily batted away by Richard’s ‘keeper until, 20 seconds before the half time break, Richard made a swift counter attack and, with his first shot on goal of the game, went 1-0 up. Adrian equalised early in the second, before Richard took a decisive lead with a couple of minutes to go with a mishit shot that trickled inside the far post beyond Adrian’s stagnant ‘keeper. 2-1 to Richard.

Round two saw a couple of dour struggles. Adrian and Dave did their best to not upset the other’s ‘keeper in any way and finished at 0-0. Richard went to the half time break 1-0 up in his match against Mat though, again, had been dominated by his opponent. Mat got the equaliser he was looking for in the second half and the game finished at 1-1.

Going into the final round, everything was still to play for. A win to Richard would see him take the title and, with his opponent, Dave, yet to register a goal, was the clear favourite. Mat needed a big win and results to go his way on the other pitch and started strongly against Adrian. However, late in the half, an intricate dribbling sequence by Adrian’s attackers through Mat’s defence saw Adrian slip a goal past Mat’s stunned ‘keeper. Mat came out more determined in the second half and piled on some pressure, the game opening up. However, with time ticking away, things were slipping out of Mat’s hands. With 20 seconds to go in the game, Mat earned a flick in deep in his own area and mounted a quick attack. However, a rule debate saw the clock stopped and a deep discussion amongst the four players ensuing. In the end, the decision was made to replay the scenario with the time reinstalled. Mat took off – but forgot to touch the ball with his second flick. Adrian swiftly moved forward, got into the shooting area in one sweeping movement and put the ball in Mat’s goal with the final action of the game. On the Astrobase pitch, a tense struggle took place between Richard and Dave, with neither player being able to get on top in the first half. In the second half, though, the unbelievable happened – Dave finally bothering the scorer! He held on for a famous victory, throwing the entire points table into chaos. When the dust settled, all realised that Dave had emerged as the tournament victor. All that was left was to work out the minor placings. Adrian was in second place on goal difference, but a heated debate ensued as Richard argued the head to head result between equal players should be used, which would give him the second placing. As voices were raised, Richard stormed out with his board on his back and drove home to Kiama. Meanwhile, Dave went home satisfied – his pre tournament goal of finishing ahead of Mat achieved.

Subbuteo Parramatta’s next club meeting will be on Thursday March 1, with the next WASPA tournament on Thursday, March 15, both at Good Games Bella Vista.

(note: some events in this report may be exaggerated for dramatic effect)