Mat: There’s a message on my phone from Steve saying, “Can you give me a call?”
rings Steve, talks for a few seconds
Mat: Hey, Adrian – Steve wants to talk to you.
hands phone to Adrian
Adrian: Where are you guys? You said you’d be here in 5 minutes – 20 minutes ago. We need to get started!
Steve: Yeah, you don’t want to know where we are. But we’re gonna be a bit late. We’ll be there in half an hour.
Adrian: What?!! OK – will you be going anywhere near your house on your way here? We need an extra set of goals. Long story.
Steve: Ummm… well… I… Look… it’s all Gordy’s fault. We’re actually at Good Games in Chatswood. When I picked Gordy up and asked him for directions, he convinced me the comp was on here, not at Parramatta.
Adrian: Wait – doesn’t Gordy live in North Parramatta?
Steve: Yeah – we probably could have walked from his place, but we drove to Chatswood instead. It’s all Gordy’s fault!

Those who had been privy to all the trash talk within the Subbuteo Parramatta training sessions and online conversations in the few weeks leading up to the first inter-club tournament of the ATFA era knew that this chain of events would now be enough ammunition for taunts for a good three and a half years – at least. Subbuteo Parramatta members have been known to walk away from the game completely rather than face another bout of sledging, so the big question that arose out of today’s tournament – more significant than the results, more pressing than the foundations of inter-club rivalry that were laid – was: Will Steve Diasinos and Gordy Dudley be able to stand the future onslaught? Only time will tell. 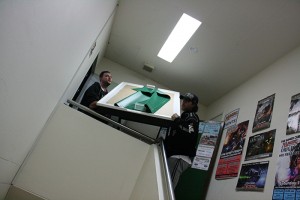 Adam, Mat and the little table that couldn’t.

The day had begun inauspiciously – wanting to use 4 identical pitches, Adam Reynolds volunteered his, attached to its table. The main problem was the incompatibility of the solid-as-a-rock table and the front door, found at the top of 3 flights of stairs, of The Games Cube. After he and Mat Barrie had hauled the beast up, 20 minutes of forcing, thinking, twisting, turning and swearing weren’t enough to find a way to get it inside the venue. There was nothing for it but to turn around and drag it all the way back down. A hasty alternative board was slung together, but needed some non-screwed in goals. Adam and Mat took off to Toongabbie to get some, Fabrizio Coco cooled his heels sitting on Strathfield station having missed his train, Steve and Gordy made the long car trip to their home ground, and a hastily rescheduled tournament

We can’t all be No. 1 – so either Mat or Eliot is wrong! All the players from the afternoon.

began. Let’s not lay the blame for ALL of the day’s woes on the Subbuteo Parramatta boneheads, though. A complete lack of interest from the once proud and mighty Northern Falcons meant that they had to rope in a few outside extras and still failed to fill their two team quota!

While initial omens were worrying, once play got underway, the day was simply brilliant. Parramatta A started against Falcons B, with the Parramatta players teaching relative newcomers Neil and Jonty Brener and, playing his first ever game, Todd Giles, how to make their way around a subbuteo pitch in good natured matches. While the results all went as expected to give Parramatta the first win of the day, foundations were laid for the future progress of the new players.

By the time of the second game, all the errant Parramatta players were on board so that they could face the might of Falcons A. Adam snuck a late goal past Eliot to go to the half time break at a very respectable 2-1 down, before succumbing to the Kennedy onslaught in the 2nd. Falcons’ guest marquee man, Paul Magee, had a calm and measured win over Mat. The other two games were crackers, with Gordy and Louis Dettre playing out a see-sawing 2-2 draw. Meanwhile, Steve, having been relegated to Parramatta B for his earlier misdemeanours, was drawn against his arch-nemesis, Steve (Dettre). Another great game saw Big Steve take the lead early in the second half, only to be pegged back by Mini Steve with a few minutes to go. With 2 wins to the Falcons, they took all 3 points. 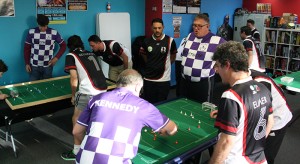 2v2 on each table. Action from the doubles game.

Next up was the day’s most fun game – the doubles. Pairs were drawn randomly from within each club, then opponents drawn via the usual teams process. Gordy and Daniele Lombardi put one past the Brener father-son duo with Adam and Mat subbing in in the second half and repeating the feat, while Raffaele Lombardi and Mini Steve took out a narrow victory over Todd and Louis (with Paul as sub). Two matches won gave Parramatta the victory in the overall game but Big Steve and Eliot finding the back of the net and keeping Fabrizio and Adrian Elmer at bay saw them record a hard-fought, and well enjoyed, match victory.

Next up were the reverse singles, beginning with Parramatta B against Falcons B. All 3 Falcons had improved noticeably over the course of the day and accounted for themselves well. Parramatta took two close wins to go with a draw across the 3 matches, to take the points in the game, giving the club an unassailable lead before the A team clash.

Despite the result having been rendered academic, there were some intense rivalries that were being renewed, so there was no love lost between the A teams. The showdown saw both clubs follow orthodoxy in the match ups, with the top seeds playing each other, 2v2, 3v3 and 4v4. Adrian battled Louis and scored a goal each half to take a 2-0 victory. Daniele did likewise in his match-up against Paul with an unanswered goal in each half. However, to even up the scores, Raffaele went down to Big Steve in a tight tussle and Eliot let out his largest celebratory yell of the day when he finally breached Fabrizio’s defences, having failed to do so in a few previous encounters. With 2 results each, the game was drawn, leaving the final points tally at Subbuteo Parramatta 10 : Northern Falcons TFC 4.

Of significant note was the fact that, following the end of play, and in the ensuing posting of photos and thanks all ‘round on Facebook etc, little mention was made of the actual result! The great day’s play, the doubles fun, the nature of playing in teams instead of as individuals and the all ‘round camaraderie were what was discussed. A great success and, hopefully, the first of many inter-club tournaments to come. Many thanks also to The Games Cube in Parramatta, our ever supportive and accommodating hosts for the afternoon.