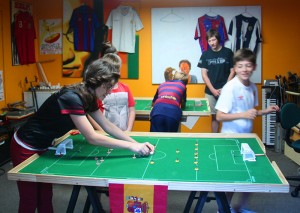 Setting up for the opening round

The Subbuteo Parramatta club proudly hosted ATFA’s first ever stand-alone junior tournament during the recent school holidays, with results going towards the players’ WASPA ranking points. A small but dedicated bunch turned up at the Subbuteo Parramatta clubhouse bright and early on Monday morning to spend a few hours having fun over the Subbuteo pitches. Lucas brought along a couple of mates, brothers Jakob and Thomas, who spent the first round watching how to play and picking up the rules. Imojjen and Daniel played out a scoreless draw while Æowyn scored an excitedly celebrated winner in her clash with Lucas. The two new boys got their first taste of playing in the second round of group games. Both showed they had picked up the basics very well. Their respective opponents, Daniel and Lucas both came away with wins, but the margins were small with neither Jakob nor Thomas looking out of place. In the final group games, Imojjen slipped one goal past a quickly learning Thomas, while Æowyn and Jakob played out a goalless draw. So Daniel came out on top via a superior goal difference in Group One, while Æowyn topped the Group Two table. 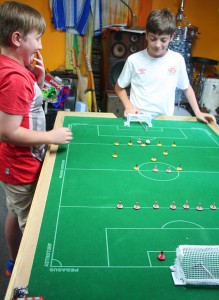 Thomas, Daniel and the joy of Subbuteo.

In the first semi-final, Lucas slipped a goal past Daniel to take the match, while the two sisters, Imojjen and Æowyn, picked up their rivalry but couldn’t be separated, even after extra-time. A shoot-out was called for, with both girls bursting with nerves. Hugs were given between each shot but it was Imojjen who prevailed in the end. Which means the two group winners were consigned to the 3rd/4th play-off and the two group runners-up were headed to the final, demonstrating the closeness in quality between all the players.

Thomas and Jakob faced each other in the minor placing play-off where big brother Jakob scored his first competitive goal to take a 1-0 victory. In the 3rd/4th play-off, Daniel snuck a solitary goal past Æowyn with a quick manoeuvre that left Æowyn unable to get her hand on her ‘keeper in time. And so to the grand final. Imojjen was playing one of her best games ever and crafted a deserved lead midway through the first half. From here the game was a tense affair, with neither player being able to get on top. Imojjen looked to be heading to the title but this also lead to nerves kicking in. With just over 60 seconds left on the clock, Lucas shot his equaliser into the back of Imojjen’s net. With neither player able to find a quick winner, the game went to extra time. Again, neither player could find a way through for a decisive goal, so shots were called. Lucas took an early lead with his second shot, but Imojjen kept in touch after this. With a chance to draw level with her fourth shot, nerves really kicked in and Imojjen managed an incredible feat – her flicking finger doing an amazing dance around the figure and connecting directly with the ball, sending it off sideways! Lucas’ 5th shot was saved by Imojjen, but he held a 2-1 lead, meaning Imojjen needed to score her 5th to send it to sudden death. In spite of a good shot on target, Lucas’ ‘keeper was able to keep the ball out and he jumped off in celebration of his triumph, Imojjen having lost her second consecutive tournament grand-final shoot-out. 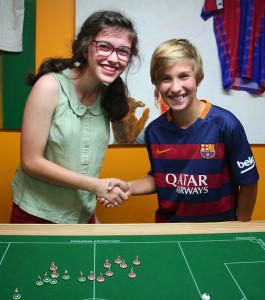 An excellent morning of fun for all involved with a few new players introduced enthusiastically to the great game. A big thanks to Geoff from the Hipfingerz club for making the trip out and helping with officiating. Hopefully we will see the junior scene continue to grow!