It was a tale of those who had and those who hadn’t practised their shootout skills in the 2016 September Cup. Shootouts decided both the Opens and the Junior grand finals in high drama, a fitting culmination this season’s edition of Australia’s longest continuously running annual tournament. 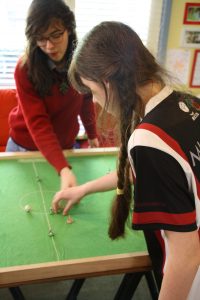 The Juniors were typically tight in their match-ups. Lucas started with two draws, one each against Imojjen and Æowyn. This meant that the final group match between the sisters would have a vital bearing on the final standings. In the second half, Æowyn worked the ball into the shooting zone, but didn’t have any figures close to shoot. Imojjen, thinking there was no danger, didn’t bother picking up her ‘keeper but looked at what defensive flick she might make. Æowyn saw her slim opportunity, and slotted an attacking figure between two of Imojjen’s defenders from distance, getting a perfect cut on the ball. It took both players a few seconds to realise the ball was in the back of the net, and Æowyn’s typically vociferous squeals alerted the entire premises that she was, for the first time against her sister in a competitive match, in the lead. She held on to top the standings. The three decided a grand final play-off between the top two would be good, so Æowyn forewent her chance to take the title outright, laying it on the line in a decider.

In keeping with their 1-1 draw from earlier in the day, Lucas and Æowyn slugged it out for a goalless draw, sending the match to shots. In a tense shootout, the lead changed hands through the duration. With her 5th and final shot, Æowyn hit the far post, the ball rolling across the line and stopping dead half-way across – no goal and no victory! So, to sudden death. Æowyn had been practising shootouts for use in her school competition, and the techniques paid off. She successfully kept Lucas’ next two out and, though she was unable to score from her first sudden death shot, she was able to clinch the title with the next, winning her first ever tournament. 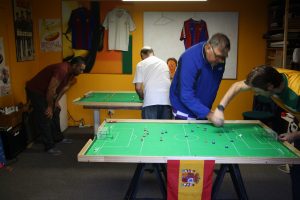 In the Opens, two groups were assembled and players chose their respective classic Subbuteo teams, ranging from 70s heavyweights through to contemporary 21st century Subbuteo brand figures, all to use on vintage cloth and nylon Subbuteo pitches and tiny little Subbuteo goalkeepers. Steve opened his account with a tight 1-0 tussle over Dave. Adrian came out all guns blazing against Tony, scoring 3 but also allowing Tony a goal via a travelling goalkeeper error. Mat was matched up against Kostas, playing his first competitive match since his teen years in Greece. In a good showing, he was pipped 1-0 by Mat. He struggled a little more against Adrian, conceding 4 goals. Meanwhile, in one of the day’s surprising results, Tony scored two early goals and a third later in the piece to put Mat to the sword. Newcomer, Paul (who had only played his first ever game of Subbuteo 4 days earlier), held up reasonably, going down 3-0 to Dave. In the final match up of Group A, Steve went on a bit of a spree against Dave, including one final miracle goal. Utilising the classic Subbuteo curl, Steve managed to use three figures doing a series of curls to touch the ball, then play it forward, for another figure to curl and connect. Then the final curl around a defender to touch the ball, play it back for the final figure to shoot into the top right corner! Mat scored one of the goals of the day – a long range effort chipped into the top corner to beat Adrian, while Kostas scored his first goal of the tournament, though conceded four to Tony.

So Steve faced Tony in Semi-Final 1. Midway through the half Tony took the lead, piling the pressure on Steve. However, Steve settled in to his groove, drew on his years of classic Subbuteo experience to come from behind and win 3-1. In Semi-Final 2, Dave took and early lead against Adrian but Adrian pulled back the equaliser soon after. A tight second half failed to split the pair so shots it was. Neither player was particularly good, each managing only a single successful shot of their first 5. Dave then buried his first from the corner in sudden death to pile the pressure on Adrian. However, in a change of form, Adrian also scored his to keep the game alive. His practise with Æowyn then paid off, as he first saved Dave’s next shot, then slotted home to win the match.

Mat had to leave early to prepare for a hot date, so Kostas and Paul played a consolation final, Kostas’ childhood experience showing as he put three past Paul, though Paul did, excitedly, have his first ever competitive shot on goal. In the 3rd/4th Play-off, the day’s most surprising result again featured Tony, though this time he was on the receiving end. Dave put him to the sword with 4 unanswered strikes, though claims only 1 of them was a well-worked goal deserving of the title! 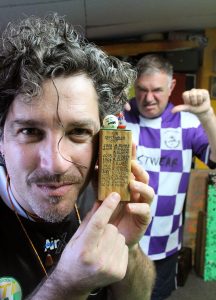 The victor and the vanquished

In the grand final, Adrian faced Steve. The September Cup, using figures that players are less used to using, had provided Adrian with his only ever victory over Steve in the past, so Adrian was hopeful he might be able to spring a minor upset over the favourite. The game was evenly balanced throughout, but Adrian managed to take the lead towards the end of the first half, positioning himself well for a relatively straightforward shot. But there was drama to come. With just 5 minutes left on the clock, and the taste of victory on Adrian’s lips, he played an innocuous ball across his own goal box with a defender. Except that it didn’t quite go across as planned. The ball trickled gently towards the goal and Adrian’s desperate lunge towards his goalkeeper was not enough to keep the ball, and the own goal, out. Steve doubled his efforts to snatch the victory, employing the world famous ‘Magee Swarm’ for the final few minutes, though neither player could take advantage of their respective late chances. So, another shootout. With Æowyn’s recent shootout victory fresh in his mind, Adrian used his training, keeping Steve goalless in the shootout, taking the match, and his first September Cup title since 2007, with a shot to spare.

Many thanks to all who played, including our two new competitors who were introduced to competition play via this tournament played in the best of spirits with great camaraderie and fun. 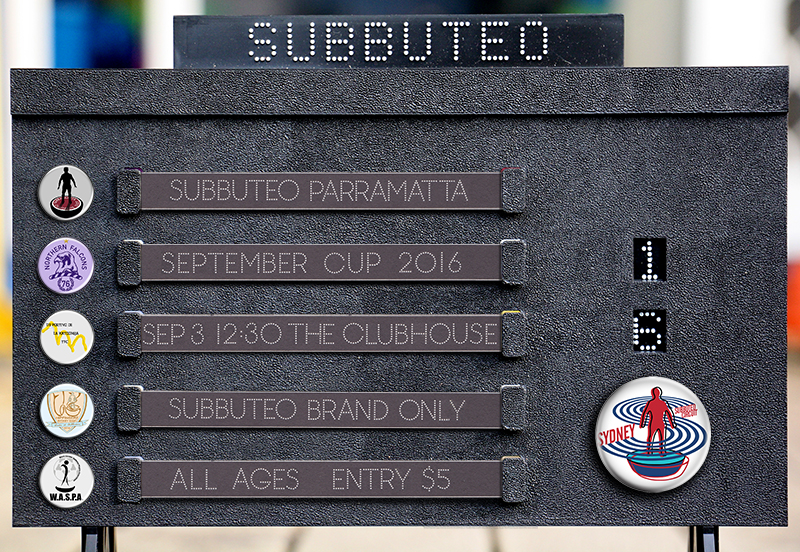 The days have started to get longer, footballers are becoming either nervous about their upcoming semi-finals or disappointed to have missed out this season. The grass is starting to grow again after hibernation and temperatures are starting to warm up. That can only mean one thing – the September Cup is just around the corner, signalling the start of the new Subbuteo season!

The September Cup was first played in 2003 and is now Australia’s longest running annual Subbuteo Tournament. This year, it returns to its spiritual home date of September 3, the 13th anniversary of the first edition. The September Cup is also unique in the Australian Table Football landscape as it is the only tournament where only Subbuteo brand equipment is used – balls, pitches, figures and ‘keepers. See the golden oldies’ eyes mist over as their figures curl gracefully. Hear the younger players curse as they struggle to stop anything with ‘keepers half the size they’re used to wielding. Feel the warmth and idiosyncrasies of traditional cloth and nylon Subbuteo pitches.

The tournament will be held at the Subbuteo Parramatta Clubhouse, starting at 12:30. Entry is $5 to cover the cost of drinks and nibblies. All players are welcome, regardless of age, gender or Subbuteo experience. New players are always welcome and all equipment is provided if you don’t have any of your own. The tournament will also double as the first round of the newly rebranded Sydney Subbuteo Circuit – a series of 8 tournaments over the season to help determine Sydney’s champion players.