An open invitation was given for anyone to come along to a WASPA tournament at the Subbuteo Parramatta clubhouse but, as it turned out, for the first time ever, all participants were also members of the Subbuteo Parramatta club. A good field of seven included new player Tony Testa, who had a couple of friendly games to learn the rules and was soon playing with as much passion as anyone. 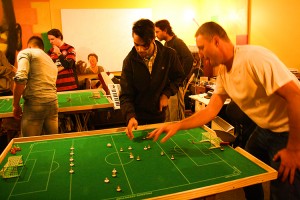 Mathew shows the best positioning of the tongue to keep your body correctly balanced. Playing against Gordy, with Adam and Fabrizio looking on as Steve battles Tony in the background

Two groups were set up. Mat Barrie’s constant practise over the last few months, along with his new, slick Manchester United teams, gave him the confidence to really push Adrian Elmer, their game ending in a hard fought draw. Fabrizio Coco was pushed all the way by Adam Reynolds, with a single goal in the second half and a shot of Adam’s hitting the woodwork before that giving Fabrizio the win. Steve Diasinos returned to action after an extensive layoff and his precise, patient game payed dividends with another 1-0 victory over Mat. Gordy Dudley also returned after an extended off-season and, while he was able to equalise after going behind early, his finger fitness let him down as he conceded 3 unanswered second half goals to give Adam a 4-1 victory. More often used to defending, Mat struggled to pierce new boy Tony’s defense in spite of dominating possession. He finally broke through to take a 1-0 victory. Steve and Adrian, meanwhile, continued their ongoing rivalry with both players having chances, but Steve finally burying one late in the second half to take the game 1-0. Fabrizio made light work of Gordy 3-0, though Gordy was beginning to re-find his rhythm, which would pay off later in the evening. Adrian and Steve then had identical 3-0 scorelines over Tony in consecutive matches, meaning the semis would see Steve play Adam on one side with Fabrizio fighting Adrian, who only got through by virtue of a better goal difference than Mat.

Both semis were close games. Fabrizio had the bulk of the attack against Adrian, but couldn’t find his way through Adrian’s dogged defence until late in the game, when he got around the right side of Adrian’s defense to set up a clear shot on goal, which was duly dispatched. Adam was also pushing Steve on the other table and had a few chances but couldn’t find the goal. Steve’s experience held out and he was able to also win 1-0, setting up a final showdown with Fabrizio.

In the consolation final, Gordy finally found his touch and was able to keep his defenses much more solid against Mat. In a very tight game, the deciding action proved to be Mat missing the ball with his traveling ‘keeper, leaving a simple touch in for Gordy. While, on paper, it was a token goal for Gordy, his history of missing such gifted opportunities is extensive, so his celebration on putting it away was more ecstatic than anything else seen on the night!. 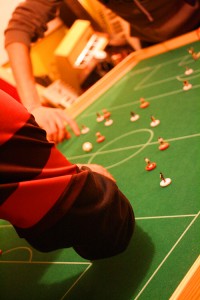 In the final, the first half was a tense affair, with Fabrizio taking a late 1-0 advatage to the half-time break. In the second half, both players pushed hard, both created chances and each missed some golden opportunities, Fabrizio speed forcing mistakes from Steve but also resulting in some mistakes of his own. With just a couple of minutes to go, Fabrizio scored a second. This made him relax, though, and Steve countered with a quick reply, setting up a grand stand finish. In the end, Fabrizio clung to his lead with Steve pushing everything forward, a great game finishing 2-1 to Fabrizio.

Another great night which particularly helped the club to feel more like a club, with some plans also hatched for the future. Lots of extremely tight games, great atmosphere with lots of stories and banter (if you ever get the chance, ask Adam about how he first came across Subutteo!), a new player – what more could you ask for?